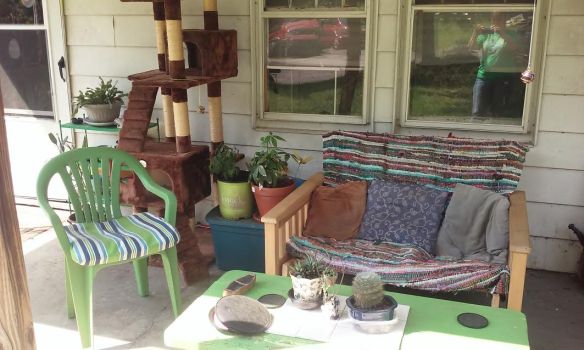 When I was in Florida earlier this month, I was impressed by some of the screened in porches I saw around my son’s apartment complex, some festooned with white or colored year-round Christmas-type lights, lots of plants, and decked out with comfy indoor/outdoor furniture.    I mentioned to my daughter and her BF Zach how inviting they looked and how I wished my porch was enclosed like that.

Well, as it happens,  Zach knows a bit about building and construction, and said he and my daughter would be willing to pay for half of the cost of enclosing my porch.  All I’d have to do is come up with the other half.   I’d been able to save a little this year and have enough to cover half the cost (total cost would be $900).   Since I don’t own my home (I have a landlord who doesn’t care if changes are made, as long as it improves the property) I asked him if enclosing the space would be alright.   He said it would be fine, and is even allowing me to take $100 off the rent each month until the $900 it would take to start enclosing the porch is reimbursed.

Several things need to be done.  The grey paint is peeling off the cement floor of the porch, but the old paint is loose enough it could be pressure washed off.   We’d repaint it and possibly then cover it with indoor/outdoor carpeting (to cover the cracks in the cement, which it would probably cost too much to replace).   The beams that currently hold up the roof (which is actually formed by the room immediately above the area) are old, rotting, and don’t match in size.   Zach would remove these and replace them with treated natural wood 2 by 4s, and then fit the spaces in between with screens that would start about waist level and natural wood below those extending to the floor.    A simple screen door would be installed.    After that it’s just a matter of furnishing the space and making it look great.    It would be a better place for my plants (which aren’t doing too well outside right now due to an overabundance of sunlight and heat) and a great place to read, nap, have company, enjoy the sights outside, and just relax.

It would also provide a kind of extra room as well as a nifty “catio” for my cats, where they could enjoy the outdoors while not really being outdoors.     The space is large enough to be a sleeping porch in the summer, and being enclosed would certainly help keep the bugs and the heat down.  Right now, it’s usually too hot to sit out there long in midsummer, except in the evenings.

I think we’re going to start the work next weekend.  I’m pretty excited!

This is what I envision the finished result looking  something like: 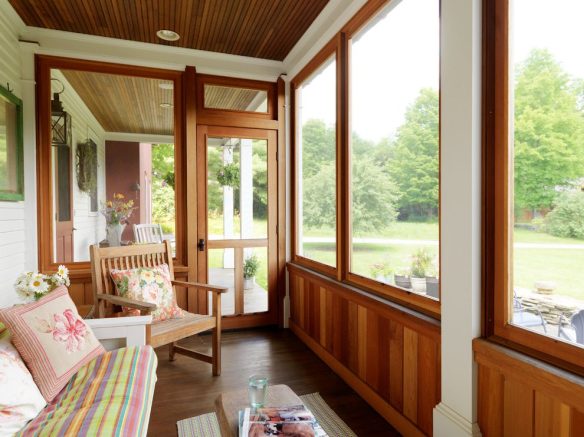