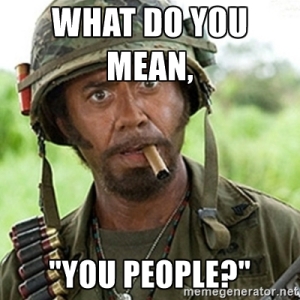 This came up in the comments under another post, but I think these two phrases are important red flags to identify toxic people,  so I’m going to copy what I said in the comments here.

Language is a powerful tool.   It can be used to control, abuse or even destroy others, even whole nations.  The children’s rhyme “sticks and stones may break my bones, but names will never hurt me” couldn’t be more wrong.   Sometimes the language abusers use isn’t straight up name-calling or unjustified and cruel criticism.  Sometimes the language used to hurt or demean others can actually seem “nice.”     This gives the speaker an easy excuse later on to say, “I never said anything wrong.  I was only trying to help!”

“You people” is used both on- and offline by people, usually narcissists or other toxic types of people, who consider you part of a group they can’t identify with or may outright despise.   It’s often used by racists to separate “us” from “them.”    It’s a form of splitting, and is an insidious way of dehumanizing a group of “others” who the speaker regards as inferior or different from them (in a bad way).   By dehumanizing people by making them the “other,” that justifies hatred or even abuse of “those people.”

“You people” seems innocuous enough, but it’s damaging because it implies that “you” are not like “me,” meaning “I” am better. The judgment and condescension are implied but are very clear.

A similar thing can be seen with certain religious types who say in a simpering, patronizing voice, “I will pray for you.” On the surface, the message SEEMS charitable enough, but when said in that condescending way, it implies that they believe you have some moral or other failing that led to your situation, and the implication is that they are “better” and therefore you are inferior to them.

I don’t want any prayers from people like that.

Both “You people…” and “I will pray for you” (said in a sickly sweet, condescending way, sometimes with an insincere “dear” or “honey” tacked on) are favorite phrases among narcissists intended to belittle you. You can bet the minute you’re out of earshot, they will be stabbing you in the back and definitely NOT praying for you.