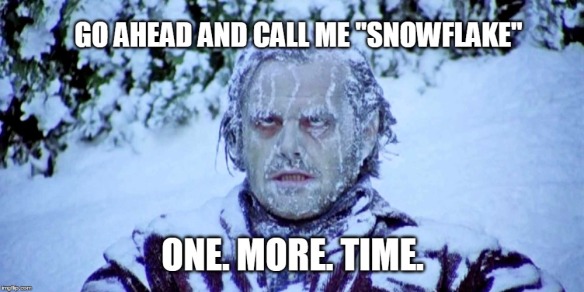 ‘Snowflake’ (sometimes ‘special snowflake’) is a slang term used in recent years, usually directed against “entitled” Millennials who complain about the America they inherited — one full of debt, minimum wage jobs,  exhorbitant student loans they can never hope to pay back, and few opportunities.

The term “snowflake” has its roots back in the 1990s and early 2000s when Millennials were still schoolchildren.   In those days, it was fashionable for teachers to recognize that “every child was special” and give awards and prizes just for participating, etc.  so that no one would feel left out.    A real snowflake is a common and unremarkable thing, as common as dust.  But since, purportedly, no two snowflakes are alike, every snowflake is special.

Over time, “snowflake” became a pejorative term, intended to shame a person for allegedly wanting “special” (or in most cases, maybe just “fair” or “just”) treatment.

Since Trump’s win in November, the meaning of ‘snowflake’ has shifted to a more political definition and is no longer confined to Millennials.    The formerly non-political insult has been used frequently by alt-right Trump supporters to dismiss and minimalize the concerns of  “the lib’ruls” (another insult they frequently use against those who oppose their far right views).  “Snowflake” is used to trivialize the very real concerns of those who oppose the Trump presidency, regardless of their generation.  It’s used against anyone of any age who dislikes Trump’s authoritarian, cruel, and controversial policies.  So, if you’re an aging person and afraid you might lose your health insurance or Medicare or social security, are worried about accelerated climate change and the shut down of the EPA when we need it the most,  fear and loathe Trump’s dismantling of democracy, are deeply offended by his war on truth, or oppose the Muslim ban, then, according to the Trump supporters, you are a pathetic snowflake who just expects special treatment or entitlements, when all you really expect is decent and humane treatment and your civil and human rights to not be taken away from you.

In Trump’s strongman world, there is no room for anything feminine, sensitive, or soft.  There is no room for compassion, kindness,  or empathy, for in Trumpland, all those things are weakness.   If you’re bullied, well, you probably deserve it because you’re a loser anyway and probably a snowflake too.   Already I hear stories about bullying of kids who are “different” now being condoned among the kids of alt-right parents. They feel empowered to bully those who aren’t like them, because  Trump is the President and he says it’s okay and he does it himself, so it must be okay.

This administration is bringing out the worst in everyone.  For Trump’s  supporters, they now feel emboldened, because they now have permission to bully and abuse those who don’t agree with them or are different than they are, and for everyone else — especially those of us who suffered abuse —  we feel triggered: dissociated, afraid and hypervigilant, caught in a downward spiral of increasing chaos, hopelessness, and despair.

10 thoughts on “‘Snowflake’ is a term used to gaslight those who dare speak out against the new authoritarianism.”