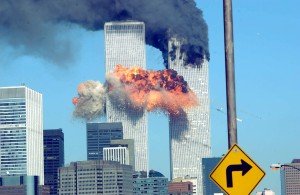 Not too long ago, one of my regular readers spoke of seeing a bunch of military tanks practicing for a martial law takeover. In America, I am hearing of an increasing number of incidents like this. I try to avoid the news, but there’s an increasing and unavoidable sense of panic that our nation may be on the brink of a removal of all our freedoms as martial law becomes the norm rather than the exception. It’s very frightening.

But what I really want to talk about is the feeling of unreality and dissociation that accompanies seeing something like what my reader did.  She said when she saw the tanks, she felt as if she was dreaming. It didn’t seem real to her. I know that feeling, and I think almost everyone who is old enough knows that feeling: it happened on September 11, 2001.

I think just about everyone remembers exactly what they were doing the moment it happened. I’m not sure of the psychological reasons why whenever there is a major historical disaster — JFK or MLK getting shot and killed…Pearl Harbor…The Challenger disaster…9/11 — we remember exactly where we were and what we were doing with unusual clarity. It’s as if our mind takes a picture at the moment we hear or see bad news.

Here’s how I remember 9/11. It’s hard to believe it was 15 years ago, because my memory of it is so clear and sharp edged. Yet I can’t remember what I had for breakfast that morning.

That day was a brilliant and beautiful, filled with sunshine, not a cloud in the sky. It was warm as early September can be, but the oppressive humidity of high summer was gone. Fall was in the air.

I was at work, in the lunch room, making myself a cup of coffee when I heard. A coworker came in, looking pale as a sheet. He said one of the Twin Towers in New York was down, that a plane had crashed into it. I stared at him, thinking he must be joking. But I could tell from his face he was not. I forgot all about the coffee, and followed him into one of the offices where a TV was on. Everyone was gathered around the TV, and there was an eerie silence. No one said a word.

On the TV they were showing a replay of the plane crashing through the first tower. I felt like I was dreaming. No, this couldn’t be real. It looked like a movie — an action movie like “Independence Day.” No way was this happening. It had to be a movie, with phenomenal special effects.

As I stared at the screen, I saw the second tower go down in black smoke and flames. A plane had crashed through it too. No, no, no, this wasn’t happening. It was some elaborate set-up, like the “War of the Worlds” bogus radio newscast back in the 1930s.

In a fog, I slowly walked back to my desk. I only had one phone call that day. Although the office didn’t close, no one was working…and no one cared. No other customers called. No one talked, except in hushed whispers. There was a lot of crying going on, even for those who had lost no one in the disaster and had never been to New York City in their lives. As for myself, I felt nothing. I just felt numb. I didn’t feel like myself at all. It wasn’t until the next day that I burst into tears thinking about it. I can’t even imagine how it would have felt to have been right there, watching these horrible events unfold from a New York City apartment window, as many did…or worse, be just outside the towers when it happened.

Whenever we hear bad news, whether it’s something that affects only us (such as when someone we love dies) or something that affects an entire nation like 9/11, we remember these events with the clarity of a movie. I’m not sure what the reason is for this, or what purpose it serves, but I believe it’s a form of dissociation–when we temporarily split from ourselves and feel as if we’re viewing the events from an outsider’s perspective. That accounts for the surrealness of these moments. It’s why we have a photographic memory for them. Maybe this is a way we protect ourselves from the shock of unbearably bad news at the moment it happens — and can’t grieve properly until our minds are ready to process it.

How does everyone remember 9/11 and what was your experience of it like?