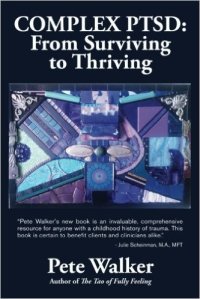 I finally finished reading a most wonderful book sent to me by my friend and fellow blogger, Linda Lee. It’s called Complex PTSD: From Surviving to Thriving, written by Pete Walker, himself a sufferer of C-PTSD and narcissistic abuse survivor. He is also a therapist who works with others with C-PTSD.

Walker’s book is incredibly readable and tells you everything you need or want to know about C-PTSD, a subcategory of PTSD that isn’t (but should be) included in the Diagnostic and Statistical Manual of Mental Disorders (DSM), the bible of the mental health profession. Complex PTSD is similar to PTSD but there are several important differences. The recognized diagnostic category of PTSD describes a disorder that is caused by one traumatic event, such as a rape or combat in a war. PTSD itself wasn’t recognized until psychologists noticed that many Vietnam war veterans were suffering from a group of similar symptoms including, but not limited to, loss of memory, dissociative episodes, panic attacks, general but severe anxiety or depression, inability to cope with day to day challenges, impaired ability to regulate emotions including anger, impaired ability to relate to others in a healthy way, nightmares, flashbacks, and physical pain with no medical causes. C-PTSD has a similar set of symptoms, but is “complex” because of its cause–instead of being precipitated by a single traumatic event, it’s caused by an ongoing series of traumatic incidents and also usually (though not always) begins during childhood. Very often it’s a result of being “cared for” by narcissistic or sociopathic parents, who are actively abusive or neglect their child. Unlike most self-help books, Walker covers the nature of narcissistic abuse and its soul-murdering effect on a child, and how this can lead to C-PTSD and its various manifestations.

Walker breaks down C-PTSD into four “types,” each one corresponding to a different type of defense mechanism, which he calls “The Four F’s”–Fight (the narcissistic defense); Flight (the obsessive compulsive or “workaholic” defense); Freeze (the dissociative defense); and Fawn (the Codependent defense). Most people will have a combination of these, but usually one will be dominant over the others. I find it intriguing that Walker describes the narcissistic and borderline personalities as manifestations of C-PTSD (BPD is a Fight-Codependent hybrid), because I also think that’s exactly what they are.

Walker doesn’t think that any form of C-PTSD is untreatable or necessarily permanent, although some forms are more difficult to eradicate than others. People with severe C-PTSD may spend most of their time in a “flashback” without even knowing that it’s a flashback. For example, if you are continually depressed and anxious without being able to pinpoint why, you may be in a flashback to a time when you were made to feel shame as a young child. Any sort of invalidation or reminder of the shame, no matter how small, could have set off the flashback.

Also discussed is the importance of nurturing your Inner Child, and Walker shows you how you can begin to do this on your own. He also explains why people with C-PTSD have such a harsh Inner Critic (which is the internalized “voice” of the abusive parent that relentlessly continues to shame the Inner Child) and how how re-training your Inner Critic to be less, well, critical and more supportive of the Inner Child can do wonders for your self esteem and help you begin to heal. One of the most important things that must happen in order to heal from C-PTSD is to be able to grieve the lost or wounded inner child and also to be able to feel and express righteous anger toward the abuser (while being No Contact with the actual guilty party, of course).

While Walker encourages therapy (and states that in severe cases says it may be the only way to heal from C-PTSD), he recognizes that it may not always be appropriate or possible for everyone. For example, some C-PTSD sufferers (usually the Freeze/dissociative type) are so hypervigilant and uncomfortable relating to others that they can’t begin to trust a therapist enough to make any progress that way. Such people may do better on their own, at least to begin with. He points out early on that even if you skip around in the book (because not everything in it may apply to everyone) that you can still be helped. He gives the reader helpful things they can do on their own, such as positive affirmations, self-mothering, self-fathering and the “Time Machine Rescue Operation,” mindfulness skills, thought-stopping the Critic, thought substitution, recognizing signs of being in a flashback, how to grieve, and finding “good enough” relational help, among many other tools.

Finally, Walker includes a list of books–which he calls “Bibliotherapy”–that he and his patients and visitors to his website have found useful. He wraps things up with six easily referenced “toolboxes” the C-PTSD sufferer can use as adjuncts to their recovery.

Complex PTSD: From Surviving to Thriving is intelligently and empathetically written, and easy to read without being condescending or dumbed down. Its chapters are organized in an understandable and logical way, and subheaders are used throughout to make it possible to read the book in easy to digest chunks. This book has helped me immensely so far, and takes the complexity out of this “complex” disorder.

2 thoughts on “Book Review: Complex PTSD: From Surviving to Thriving (by Pete Walker)”