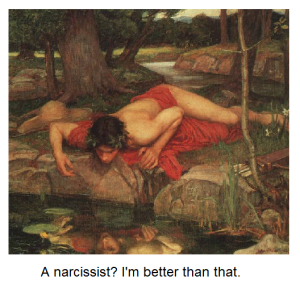 In my dealings with narcissists, it’s sometimes been tempting to tell them to their face that they’re narcissists, thinking maybe it could be the wake up call they need. It’s a nice fantasy to think they might take a look at their obnoxious, abusive, insufferable selves and try to make some changes, but unfortunately that’s just a fantasy. It won’t work, because narcissists cannot feel remorse for their actions or empathy for hurting you. In fact, they may take pleasure from it.

The following reactions are far more likely if you “out” a narcissist to their face:

1. They might rage. Or give you the silent treatment. Or laugh at you. Or deny it. Or abuse you. Or call you names. Or tell you you’re crazy or deluded. Narcissists hate the truth, and if they know you have their number, they feel threatened and will attack like a cornered rattlesnake. It’s in their nature.

2. It might give them twisted narcissistic supply. Some narcissists may actually take a perverse pride in being called narcissistic. Rather than making them feel shame and remorse, telling a narcissist they’re a narcissist may flatter them and inflate their ego even more, which could lead to them becoming even more narcissistic and abusive than they already are.

3. They might project it back onto you. This is surprisingly common. Projection (attributing their own bad behaviors to their victims) is one of the more common red flags of a narcissist, so if you call a narc a narc, don’t be too surprised if they start telling everyone YOU are the narcissist.

4. They might learn more to hone their weapon. Taking #2 a step further, some bright narcissists may actually decide to learn more about their disorder–but not to learn how to control it or improve the way they treat people, but rather to educate themselves about abusive narcissistic mindgames they haven’t already tried in order to use them against you. I actually know someone this happened to when she called her ex a narcissist. He started reading every book he could get his hands on about NPD and narcissistic abuse, and systematically started using the information to “prove” his girlfriend had NPD and that he was the real victim (see #3).

5. They might not be a narcissist. There is always a possibility (even if small) that the person you think is a narcissist really isn’t. If you’re not a mental health professional qualified to make a diagnosis based on standardized testing and interviews, your own bias, lack of knowledge, or just plain dislike of a person could be influencing your judgment of them. Perhaps they are having a bad day (or a bad life), or suffer from some other disorder that can mimic narcissism. Even non-disordered people can act like narcissists at times. All of us can. So if you’re certain someone is a narcissist, you may be right, but it’s still best to keep that information to yourself–or only tell your close friends.