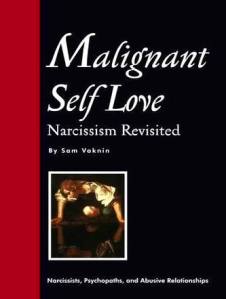 I first heard about Sam Vaknin’s book “Malignant Self-Love” about 15 years ago–when I made a cursory online search about NPD after I realized my own mother was one. At that time, Vaknin was pretty much the only voice on the Internet about narcissistic abuse. Vaknin, a self-confessed narcissistic psychopath , had written a “bible of narcissism” and it became obvious, from scanning the selected pages he provided in PDF format on his website (which has never been upgraded to a more current look and format–he uses the ancient blogging site, Tripod), that this guy was obsessed with his own disorder to the point of unhealthy navel-gazing and what’s more, he and seemed to hate people like himself. What was this, some kind of pathology performance art?

His book and his own story that inspired the book intrigued me, but at the time, I was still trapped (or thought I was trapped) in my abusive marriage and my kids were still very young, so I filed this information away in the back of my brain, and quickly moved onto other things, such as trying to keep my doomed marriage together. In fact, I didn’t think about his book again until late last year, after I left my narcissist.

When I started my blog in September 2014, Vaknin still had a huge presence online (though he no longer had a monopoly on narcissism). He was often quoted on ACON blogs and even in more serious articles in publications like Psychology Today. The difference was, by now, he was no longer alone. There were other voices joining his–Kim Saeed, Michelle Mallon, and Kathy Krajco (who is with us no more) just to name a few, and of course psychologists and other authors like Dr. George K. Simon, Robert Hare, and Marsha Stout. And too many ACON (Adult Children of Narcissists) bloggers to count. By this time, Narcissism was a Very Hot Topic, at least on the Intenet. Sam Vaknin probably began that trend, in spite of his being so vilified by so many of the narcissism bloggers he paved the way for.

A self-professed malignant narcissist writing self help books for victims of abuse may seem like the ultimate irony–but when you look a little deeper, it makes a lot of sense. Who better than a narcissist to know what makes a narcissist tick? Every other expert who writes books about narcissism has to make educated — or not so educated — guesses.

If you’re not a narcissist, it’s almost impossible to imagine what such a disorder can feel like to its bearer, just as the pain of cancer can never be convincingly described by one who has never suffered from cancer. If a book were to be written about what it’s like to have cancer, the writer should be a cancer survivor–or one about to succumb. My point here being that Sam Vaknin, whether you like him or not, whether you think he’s doing ACONs a service or hurting them, whether he’s got the proper credentials or not (and personally I don’t care about the whole credential brouhaha because not once in the book does he say he’s a mental health professional and in fact it’s full of disclaimers), is definitely qualified to write about narcissism. His primary qualification–the only qualification that really matters–is that he is speaking from personal experience.

So I pulled out my debit card and ordered the huge black-and-red tome with its Caravaggio “Narcissus” illustration on the cover (which, for me, was a draw in itself, because I love the painting). It set me back about $40 on Amazon (you can get a copy signed by the author for about $54.95) I thought the price was a bit high, until I held the book in my hands. It was as big as the Bible! Maybe even bigger. I flipped through its onion-skin thin Bible-like pages and saw how tiny the print was.

Malignant Self-Love is not a book you can read in one sitting–or even ten. Maybe not even twenty. Normally, I’m a very fast reader. Until I started blogging (and no longer had time to read much), I could consume about 3 good-sized books a week. People looked at me like I had three eyes and a horn growing out of my head when I’d tell them I finished a 300 page novel in 2 days. But Vaknin’s book is different. It’s not only got a LOT of information–almost more information about narcissism than you’d ever need or want to know–but it’s a dark and depressing read too, and I found that while reading it, I felt my mind being sucked into Vaknin’s bottomless black vortex of pain. He’s pessimistic, negative, and hates his own disorder. He also seems to hate himself for having NPD, and demonizes narcissists in general, referring to them as non-humans and machines. He demonizes himself in the process, and warns his readers to stay far away from people like himself. You would think from all this encouraging advice to the sort of people who would have been his prey, that he cares about the victims. I’m not so sure, since he himself is quoted as saying he never intended to help anyone by writing Malignant Self-Love, that his primary motive was narcissistic supply and attaining a guru-like status for himself. 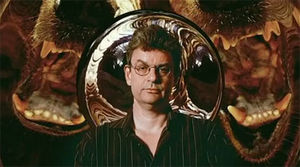 Yet in spite of his heart never having been in its creation, Malignant Self-Love is an outstanding piece of writing, and English isn’t even Vaknin’s native language. He weaves words together into a beautiful piece of literature the way a holy man weaves tiny colored threads together to create a Persian rug–with an intricacy and detail that is rare in modern writing.

Indeed, Vaknin’s writing at times can seem as if it’s from a bygone century. His phrasing is old-fashioned and his writing is highly descriptive, hearkening back to 19th century authors. At times it reads almost like poetry. And it’s very emotional writing. You come away from the pages (which feels somewhat like coming up for air after having been underwater too long), with the strong sense that whenever Vaknin refers to the “Narcissist,” he is really speaking about himself in the third person. There is passion and pain in these pages, but more than anything else, there is rage. White hot rage. Sam Vaknin is…intense. And so is his book.

Although some mental health professionals and other who study NPD have criticized Vaknin for appearing to take several related personality disorders–Antisocial, NPD (the less malignant type described in the DSM-V), Borderline Personality Disorder, and even autism–and churn them together into a mutation of the psychiatric definition of NPD into a devastating form of psychopathic malignant narcissism. Some mental health experts have even said Vaknin’s book has been damaging to the field of diagnostic psychology because it blurs the lines between several distinct personality disorders.

But since when is the field of diagnostic psychology a real science anyway? At best, it’s a social science; at worst, an art form–so in my mind, Vaknin’s theories about NPD make as much–or more–sense than some of the experts.’

Vaknin was also not the first narcissism writer to ever do this. While M. Scott Peck’s 1983 book “People of the Lie” is written from a completely different perspective from Vaknin’s–one with religious overtones written by psychiatrist who is also a born-again Christian–Peck’s book too seems to mix traits of NPD and ASPD. And while Peck didn’t call the hybrid disorder “malignant narcissism” (he calls it “evil”) because that term wasn’t in wide use in 1983, people could relate–because we almost all know someone like that. Vaknin’s book also describes people that victims of narcissistic abuse recognize–a dangerous kind of narcissist who has nothing but ill will toward others, but it was born from having been abused themselves, as Vaknin was abused.

Vaknin’s readers are mostly women, who are in a relationship with a narcissist or thinking about leaving one. Sam Vaknin does not disappoint. Victimized, emotionally damaged women see Vaknin as a kind of online therapist (especially those who frequent his discussion groups and forums), and the “transference” of strong feelings of a patient to their therapist is an important development in the psychotherapeutic relationship. If they’re using the Internet as their therapist, Vaknin can easily become the object of these feelings of transference. He becomes a kind of mirror reflecting back to them all the admirable qualities they have imbued him with–-which may or may not be accurate-–but it’s what they want or need to see in him. The problem is, unlike with a therapist in a controlled psychotherapeutic setting, women experiencing transference toward a online cult hero like Vaknin have no idea what to do with these feelings or how to use them to learn more about themselves. But on the plus side, he does tell them how to disengage and tell them WHY they should disengage and what makes their narcissist tick, and of course he’s right. Many of these women (and men too) claim Vaknin’s book saved their lives and helped them get started along the road to self-discovery and freedom from abuse.

I think this picture shows a sad side Sam Vaknin rarely shows in public. That’s why I think it might have been a candid photo that caught him with his mask temporarily down. Of course he could be acting for the camera too.

If you don’t like ponderous, pessimistic tomes or books that don’t require the reader to think, then Vaknin’s bible of narcissism may not be for you. But if you like a book you can savor and digest over weeks or months, the way you would savor a fine wine by taking small sips and not chugga-lugging it down like a cheap bottle of Gallo, then I recommend his book if you’re in an abusive relationship with a narcissist, trying to go No Contact, or just interested in narcissism. His writing is so good it’s worth reading even as just a work of literature, even if you disagree with his assessment of NPD as a blight on humanity and the precious little hope he conveys that sufferers of NPD can ever get well (which is one of the few problems I have with his book).

It took me nearly three months to finish Malignant Self-Love, but only because I could only swallow a little of his brand of darkness at a time without making myself sick. However, when I finally read the last page, I came away feeling like I had an insight into my narcissists that no one else could have made possible. It was as if Mr. Vaknin provided a sort of mirror to my narcissists and made them talk to me– openly and honestly–about why they did the awful, hurtful things they did. In giving my narcs a voice, albeit a depressing, raging one–I felt as if Vaknin’s book had somehow stripped away some of their power over me. And that’s always a good thing.