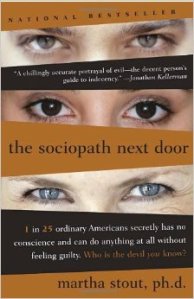 Dr. Martha Stout’s excellent “The Sociopath Next Door: The Ruthless versus The Rest of Us” is an easy to read, well researched and often entertaining study of the psychology of evil. In some ways similar to M. Scott Peck’s “People of the Lie,” but without the religious overtones, Stout chillingly describes the “ice people”–the sociopaths that walk among us.

As many as 4%–one in 25 Americans–is without a conscience or the capacity to feel empathy for others. Stout doesn’t make a distinction between sociopathy and psychopathy, and in this book she is referring to those people who meet the diagnostic criteria for Antisocial Personality Disorder (ASPD), not Narcissistic Personality Disorder. In fact, narcissism as a disorder is rarely mentioned, although she does acknowledge that all sociopaths are narcissistic.

Stout includes many case studies of how sociopathy can manifest in individuals. Contrary to popular notion, not all people with ASPD (sociopathy) are in prison or even criminals. Antisocial behavior is found as often in boardrooms as in prisons, and sometimes more so. For sociopaths who grew up in well heeled families and were able to get a good education, their antisocial traits are likely to manifest in “socially acceptable” ways. For example, a CEO who needlessly downsizes to increase his own bloated income, ruthlessly firing hundreds of employees without caring about the hardship those fired employees now face, is as conscienceless and unempathic as a cold blooded murderer.

A sociopath can be the gossipy woman next door who tells malicious lies about all the other neighbors, it can be the company president who embezzles and defrauds, or it can be the vicious serial killer who preys after college students.

Stout talks a lot about conscience, that quality that separates the antisocial from everyone else. It’s the lack of this trait that makes people evil. She offers a number of reasons why someone may lack a conscience–they may have suffered horrible abuse or neglect as young children (she discusses the sad plight of Romanian children who were adopted by American parents and many of these kids were found to have an underdeveloped conscience), they may not have been taught prosocial values, or they may be deficient in the parts of the brain where the conscience develops in normal children.

I definitely recommend “The Sociopath Next Door” to anyone who has been a victim of or had to deal with a sociopath, whether at home, work, school, or in a relationship. I’m going to extend the term “sociopath” here to include narcissists and psychopaths because they too lack empathy and a conscience. Really, this book should be read by everyone, because all of us have had to deal with ruthless “ice people” who just don’t care about anyone but themselves.

3 thoughts on “Book Review: “The Sociopath Next Door” by Martha Stout”