Most parents like to tell cute and funny stories about when their children were young, or brag about their school accomplishments or tell sweet stories that show their child in a flattering or loving light. They are also proud of their children when they’re kind and nice to others. That’s the way things should be.

Not for narcissistic parents though.

Narcissists who “erase” memories of their children.
Some narcissistic parents don’t like to talk about their children at all. It’s as if they erase any memories of their offspring’s childhoods and don’t want to be reminded of it. It’s weird. My malignant cerebral narcissist sperm donor used to get bored and annoyed if I talked about the children when they were young. Inexplicably, he couldn’t stand it and became annoyed when I wanted to put some of their baby and early school pictures around the house. (He didn’t like that I displayed our wedding photos either).

He isn’t interested in his son’s accomplishments, even though Ethan (not his real name) has recently been asked to join a semi-professional urban dance crew and has been told he is a shoo-in for the finals at the next dance competition he will be performing in next month. Ethan is seriously considering auditioning for the TV show “So You Think You Can Dance” in about a year or two, when he gets just a little better. He’s completely self taught and has never had a dance lesson and yet people are always impressed by his dancing skills.

I am so proud of my son but his father could care less. I thought maybe it was because he thought dancing was “too gay” (because my son is gay or possibly bisexual–he recently told me he may have some interest in women) but he acts the same way about all of Ethan’s other accomplishments too. It’s almost as if he wants to erase him from his mind, even though he insists he loves him.

And when they “brag” about you, watch out.

My mother, also a malignant narcissist (of the somatic rather than cerebral type), loves to talk about me as a child. But her “bragging” is never about the things a normal parents would brag to their friends and relatives about. It’s never about how smart I was or what a good student I was, or what a good painter or writer I was, or how kind and generous or big-hearted or animal loving I was. Instead, she tells stories that illustrate the many ways I was “too sensitive” or how much I cried as a little girl. When she talks about me, she always brings up the most embarrassing stories, like how afraid I was of thunderstorms and how I used to run into the closet in terror (I like thunderstorms now) or how “hysterical” (she loves to use that word about me as a child) I used to get when I was frustrated or scared of something (I was afraid of many things but loved a lot of things too).

Whenever she talks about me to people, she makes me sound like there was something wrong with me (there was–I was an Aspie child with attachment issues–but surely there were good things too she could choose to talk about instead of what a pitiful, awkward, oversensitive crybaby I was). She loves to tell everyone the still-embarrassing story of my first period and how happy I was when I shouted the big news from the bathroom, because I had always been “so hysterical” and panic stricken because I was slower to hit puberty than most other girls my age (I was 13 and really not far behind at all–and I never got “hysterical” or “panic stricken” the way she insists).

I no longer hear these stories because I no longer have much contact with her, but I’m sure she still tells her friends and extended family (who she has isolated from me and turned some of them into flying monkeys against me) and they still all have a good laugh about “poor, over-sensitive, ‘hysterical’ little Lauren.” I know they also laugh about what a “loser” I am today, because I’m not wealthy like most of the family is and don’t have a great number of impressive professional accomplishments. Of course, that’s all due to my “poor choices” and not to the fact my self esteem was all but obliterated during childhood and adolescence, not only by my family but also by the bullies I often had to deal with at school.

Fivehundredpoundpeep posted an article today about the way her psychopathic MN mother (who was much worse than mine if that can be believed) and the rest of the family gave her a poem for her college graduation. Instead of it being a sincere congratulations or about how loved she was and how proud of her they were, it was a “humorous” ode to how afraid of crickets she was as a little girl. Notwithstanding the fact this poem had absolutely nothing to do with Peep’s college graduation, its real intention was to embarrass her and make her feel self conscious. It was a poem that could have easily ruined an otherwise joyous occasion. 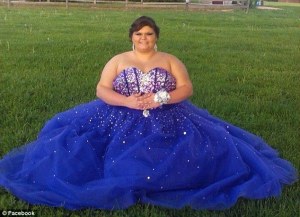 What my mother saw whenever she looked at me. (Just for the record, I think this big lady is stunning.)

My mother always loved to point out my faults–even imaginary ones she had projected onto me–in public. I’ll never forget the birthday party I had one year as a teenager. My mother had invited several of her friends to the apartment and some of my friends were there too. When it came time to open the gifts, she made sure hers was the first one I opened.

In the fancily wrapped box was a rather conservative, navy blue sleeveless dress. It was a nice dress I suppose, had I been about 40. She made me go try it on and then have me come out into the living room where everyone was sitting to model it. I obeyed because what else could I do, and she scared the living shit out of me.

Now, I was not overweight. At 5’4″, 120-125 lbs was about the right weight for my frame. But my backside was a little on the big side (not Kim Kardashian big, but still pretty round) and my mother was constantly calling attention to it. It made me very self conscious and due to this (as well as my desire to rebel against the way she’d dressed me like a doll when I was younger), I had taken to wearing baggy, masculine clothes that hid my curves. She was convinced I was “fat” and was always threatening to send me away to weight loss camp. As a somatic narcissist, she was obsessed with her own weight, physical appearance, and health. She seemed to judge other people by the way they looked instead of their personal qualities. Almost every day she called attention to how much weight I was putting on, or reminding me not to have seconds because of my “weight issues.” I become incredibly self conscious about my body as a result. It’s a miracle I didn’t develop an eating disorder.

Getting back to the birthday party and my “modeling session” in front of all the guests, after I modeled it, she announced that the dress’s dark color and style was flattering for someone with “Lauren’s little weight problem.”

You could have heard a pin drop in that room. I think everyone was shocked at her callous and embarrassing remarks. As for myself, I was so mortified I ran out of the room crying, which of course was a huge mistake because that gave my mother ammunition to remind everyone once again about how sensitive I was (and she didn’t mean this in a complimentary way). She was always making jokes at my expense and then when I didn’t laugh or if I looked hurt, it was always “Lauren is just being over-sensitive again” or “Lauren has no sense of humor.” I’ve heard this is quite a common accusation narc parents use against the child they have chosen to be their scapegoat. They hate sensitivity and love to turn it into a bad thing because it takes the responsibility for their cruel behavior off of them and puts the blame onto the child.

This is the sort of “flattery” a scapegoated child can get from a parent who is a malignant narcissist. There are times I feel guilty that I don’t feel more love for my mother than I do, but when I think of all the years she demeaned me and put me down, always going out of her way to make me feel small and worthless, I don’t feel so guilty about my ambivalent feelings toward her.

I don’t hate my mother. Instead, I pity her for being so shallow and never having known who her true self might have been. She’s an intelligent woman but you would never know it because she never was interested in ideas or the life of the mind. Her eyes glaze over if you try to engage her in any “deep” topics. She reads pulp novels and fashion magazines, never anything scholarly or educational.

She has now lost her beauty due to age (and too many facelifts) and she is all too aware it. Knowing she has lost her physical beauty–the one thing that gave her an identity of sorts–has turned her bitter and angry in her old age.

28 thoughts on “Narcissist parents demonize their own children.”