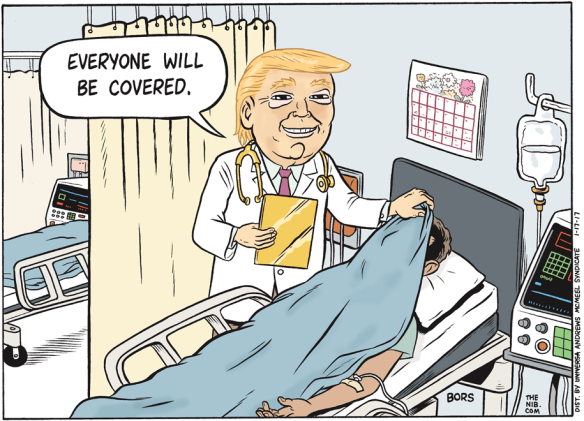 I’m freaking out right now.   The GOP is going after ACA (Obamacare) AGAIN.

This time, some federal judge in Texas (whose actual name is Reed O’Connor, though that hasn’t been widely reported) said the law is unconstitutional and therefore needs to be repealed.

There was a detailed article about this from the New York Times.  I had it linked here but the link no longer works so I removed it.  I’m too disgusted and angry to try to explain why this judge thinks the ACA is unconstitutional and don’t really understand his logic.  I think it’s all bullshit, frankly — just another way the GOP can try to strip healthcare away from 20 million Americans and ratf*ck the sick, poor and elderly.

I happen to be one of those Americans who will be affected should this cruel law be upheld (I have heard it will probably be appealed and not be upheld, but I’m not getting my hopes up).   The ACA is the only way I can afford health insurance.  I’m way too old to risk not having health insurance (though I’m fairly healthy, I know I won’t always be), and I’m still too young for Medicare.  The way they keep raising the age for eligibility (they want to raise it to 70, I believe right now it’s 67),  I may never be “old” enough to get it.

This predatory regime wants the elderly poor and working class dead.   I’m convinced of that.  All their actions and their lack of empathy and general cruelty makes it obvious.   Once we’re too old or too sick to make money for the oligarchs and corporations, we’re just “useless eaters” (using one of the GOP’s actual terms for us).  Taking away our healthcare is a sneaky way to kill us off when we lose our usefulness to them.

Hopefully the new Democratic Congress, headed by Nancy Pelosi (I’m very happy she will be the Speaker) can work out something that will allow us to keep our healthcare, or maybe even work with the less partisan Republicans (do they exist anymore?) to come up with something even better than the ACA.

More people than ever, even some Republicans, are demanding Medicare For All (single payer healthcare, like other developed countries have).  Maybe one day that will actually become a reality and we can stop worrying about dying or going bankrupt should we become sick or disabled.   At my age, it’s a very real worry, and right now, I’m absolutely terrified that I could lose my ACA with nothing to replace it.    I do not have a job that offers health insurance, I’m not married so no one is paying for me to be on their plan, and there’s no way I can afford the premiums on my own without the ACA.

Certain things should not be privatized or not at least have a public option (such as education).  Healthcare is one of those things.    Some things are necessities that benefit the common good and should be paid through our taxes, meaning that We, the People own these things, not private shareholders and individuals.  Those things include national parks and monuments, fire and police, education (though private schools should and can be available as well), the post office, healthcare, the military, and prisons.  Privatizing these things (or not having a public option for them) leads to nothing but further inequality and fascism.

17 thoughts on “I’m terrified of losing my healthcare.”