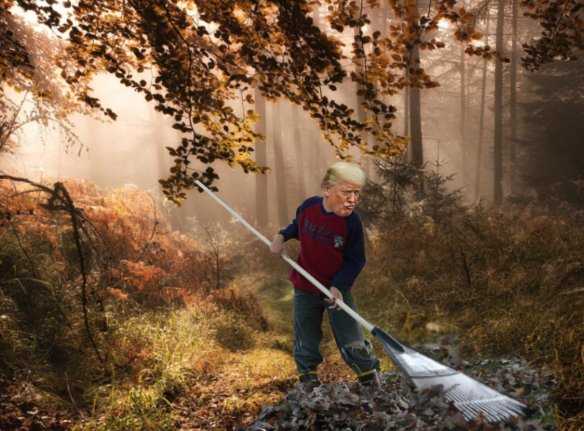 Climate change is not a theory, but a scientific fact with nearly as much evidence to back it up as the existence of gravity.  Scientists and climatologists aren’t stupid or deluded.  They have spent years studying geology, climatology, oceanography, and meteorology.   Climate change isn’t a conspiracy theory dreamed up by George Soros, China, or “the left.”   It’s not God punishing us for homosexuality or abortion (some right wing evangelicals actually believe this, but there isn’t even a logical connection between natural disasters and sinful behavior so their “argument” is no more than superstition).  Climate change is a real thing, and we would be wise to heed the experts and not right wing politicians and conspiracy theorists who continue to deny what’s right in front of them.

Climate deniers like Trump remind me of my deceased mother in law, a malignant narcissist who lied about things that were obvious to everyone else, and then, when she was shown evidence that she was wrong, instead of admitting her folly, continued to deny the obvious and even double down on her “beliefs.”     I remember a year or so after I got married, my husband and I moved into the first floor of her two family house in New Jersey.   It was an older house, and hadn’t been maintained well, and unbenownst to us, it was infested with termites.

One spring day, we had a massive swarm. Flying termites were literally coming out of the walls and oozing out of every corner.   They were dropping their wings all over the living room floor.   There must have been hundreds or even thousands of them.   I was terrified and felt like throwing up.   I called my mother in law down to look and begged her to hire a pest control company.   But not wanting to take any responsibility, she denied the termites were even there.    She said they weren’t termites, they were “bugs” caused by “dirt.”   We weren’t dirty people, but she was trying to blame us, saying if we were “cleaner people” there would be no bugs (especially since they hadn’t invaded her upstairs living quarters).

She reacted the same way when the basement washing machine broke.   It was 20 years old, and bound to break eventually, but she said we broke it because we shouldn’t have been mixing different colored clothing in the same wash.   Yeah, I know what you’re thinking.  How does mixing colors cause a washing machine to break?  It doesn’t.    It was a lie she made up to blame us.

Trump’s behavior toward the people of California when he finally went there to survey the damage caused by the wildfires reminded me so much of my mother in law.   Instead of showing empathy to the people and offering help and temporary FEMA shelters to people left homeless by the fires, he tried to blame Californians, chiding them for “not raking” the forest floors.    Raking forest floors to prevent fires makes about as much sense as not mixing colors to prevent washing machine breakdowns, or dirt causing termite infestations.    Malignant narcissists, instead of admitting they may have been wrong, double down in their convictions,  and if they have to, they will concoct the most outrageous and ridiculous lies to “back up” their ludicrous claims.

Recently, a climate report by an independent and scientific agency came out, and it contained an alarming warning:  if we don’t stop our use of fossil fuels immediately, our planet’s weather will continue to worsen, with more severe and frequent hurricanes and other devastating storms, more frequent and damaging wildfires like the one that continues to rage in California, and eventually the ice caps will melt, completely changing the outlines of our coasts and submerging vulnerable landmasses like Florida and coastal cities like New York.   The Gulf Stream, which warms western Europe (which otherwise would be as cold as Canada and the northern US due to those countries’ high latitude) would be disrupted, and those countries could be plunged into deep freeze.

I could go on about all the changes but there are way too many to name here, and most of them would be devastating to life on this planet.

Yet Trump and his supporters continue to deny climate change, calling it a conspiracy theory, a “Chinese hoax,” and a left wing anticapitalist plot.    They see how bad the weather has been in recent years, with terrible and frequent hurricanes, wildfires like we’ve never seen, long droughts, flooding rains, the destruction of crops, much warmer winters than have ever been normal, and generally,  strange and severe weather that’s atypical for its location and latitude.

Trump thinks that because it happens to snow somewhere, or temperatures are colder than average on a given day, that means “global warming” is a hoax.   The term “global warming” has fallen out of favor (even though average temperatures are in fact rising) because the outcome of climate change doesn’t always mean hotter temperatures, even though over the long term, the earth is warming.  The preferred term is now climate change, because it takes into account the fact that a warming planet can cause every kind of severe weather, even bitterly cold temperatures.

A good example of how this can happen is the Gulf Stream (which I already mentioned earlier), a current of warm tropical water that originates in the Gulf of Mexico and crosses the Atlantic, moving to the northeast, warming up northern and coastal Europe. The warming effect gives countries at high latitudes (Ireland is at the same latitude as Labrador!) much warmer weather than they would otherwise have.   If the Gulf Stream were to become disrupted (and the melting of the ice caps and rising sea levels would certainly do that), those countries will become much colder.   Yet it’s because the planet is warming, a chain of events started by the melting of the ice caps which would turn the entire Atlantic colder for a time.

8 thoughts on “Denying the obvious.”