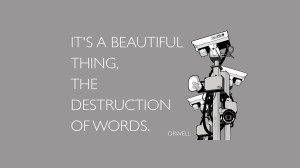 Despots and dictators throughout history know how powerful language can be, and they know that by changing the definitions of words, without people realizing it, they can change the way people think and what they believe.   Without language and the words that comprise it, propaganda and revisionist history (changing commonly held historical beliefs in order to fit a desired political or religious narrative) would become impossible, or at least a lot more difficult.

George Orwell described the insidious process of changing the meanings of words in order to change public attitudes in his classic dystopian novel, “1984.”    He called this process “Newspeak.”   It is a form of mind control commonly used by cult leaders and dictators to get people to abandon their previous ways of thinking and accept a lie as the truth (repetition of the lie is another way they get people to accept it).    Sometimes the lie they push may be an actual reversal of a previously held truth.   We can see this phenomenon today in many of extremist evangelical and fundamentalist churches, who now say that ripping migrant children away from their parents or taking away people’s healthcare is “Christian” even though Jesus would be appalled by these things.

“Freedom” (and its synonym “liberty”) is probably the word that comes to my mind first when I think about the ways language is used as propaganda.    It appears in both religious and political rhetoric.  In right wing extremism, the definition of “freedom” or “liberty” has become almost the reverse of what its commonly-held definition is.  Here is the complete dictionary definition:

the power or right to act, speak, or think as one wants without hindrance or restraint.
“we do have some freedom of choice”

Most of us agree with this definition.  We think of freedom as a concept that allows all Americans individual liberty and the ability to make their own life choices.   It is the absence of oppression.   When we think of freedom, we aren’t worrying things that benefit everyone, such as healthcare or public education, might be potentially oppressive (because of higher taxes necessary to have those things).  I think most of us would say that a person who doesn’t need to worry about going bankrupt or dying should he become sick or injured is more free than someone who can’t afford necessary surgery and loses his home trying to pay for it, or even his life.  A person who can take time off from their job to recover from their illness is more free than someone who is forced to work even when they are ill because their wages are too low to allow them to take time off.

Back during the time of Lyndon Johnson and his “War on Poverty,” this was generally understood.  Empathy still existed within high levels of government and in both parties.  Measures were taken to alleviate poverty, one of the most oppressive and limiting things a human being can experience.   An impoverished person is not a free person. Poor people spend so much time just trying to survive they cannot reach their full potential.   Rich people and corporations paying more in taxes was seen as the right thing to do for society at large and for the greater good, not as a form of robbery or wealth redistribution (this phrase is a common dog whistle used by the right to manipulate attitudes to get people believing the wealthy are the real victims).   Eventually, the commonly perceived causes of poverty shifted from the society to the individual.  Personal responsibility became another dog whistle used by conservatives to influence public attitudes and make people begin to perceive poverty as a personal weakness rather than an affliction.

“I give out Atlas Shrugged as Christmas presents, and I make all my interns read it.” — Paul Ryan

Over the past few decades, especially since Reagan’s election in 1980, the definition of freedom has been co-opted by the right.  They whine that environmental regulations and higher taxes are a form of tyranny by the majority that limits the freedom of the wealthy and corporate elite to do exactly what they want and suffer no consequences.   To suggest they should contribute to the common good through a higher tax rate or not gut laws that protect human health and wellbeing is to restrict their freedom — which is really the freedom to exploit their workers, not pay them a fair wage, deny them a safety net, and destroy the planet.    In Trump’s America, freedom is no longer freedom of the people, it is freedom of the minority (the wealthy elite) to oppress the majority.

In redefining freedom, the word democracy itself underwent a transformation from government by the people for the people, to tyranny of the majority (where the wealthy and powerful are perceived as superior and therefore naturally entitled to take whatever they want with no accountability).  The term democracy, at least in the circles of greatest power and influence right now, has become a pejorative — something bad worthy of destruction.

Similarly, religious freedom or religious liberty has also been redefined.    Most people would agree that religious freedom in America means the right to worship the way you choose — or to not worship at all.  The separation of church and state was one of the key elements the Founding Fathers wrote into the Constitution, knowing that mixing religion and government not only doesn’t work, it’s extremely dangerous and has always led to wars, oppression, and violence.    We can see this today in Middle Eastern countries where Islam is the state religion and is written into their laws.  These countries are constantly at war, including civil war.   Violence and terrorism is rampant and women, children and minority groups are victimized every day by the harshness of Sharia law.

In the early days of America, before the Constitution was written,  there were pockets of religious intolerance, most infamously seen in the Salem Witch Trials.   Other groups of colonists came here as a way to escape religious persecution in their home countries.  They came here to be free to worship the way they chose.

The Founding Fathers, while they might have been religious personally, were influenced by the Enlightenment and the primacy of reason and openmindedness over medieval superstition and intolerance.  America was founded as a secular, not as a “Christian nation” or saddled by any other “state religion.”  While Christianity is the most common religion found in America, to declare it as a state religion would automatically make anyone who wasn’t Christian — or even not the right kind of Christian — a second class citizen.  The Founding Fathers knew this, and that’s why they rejected the idea of a state religion.

Far right extremist evangelicals have been busy writing revisionist history,  insisting that America was founded as a Christian nation, and that the Constitution was divinely  inspired and never meant to be secular.   Some go even further than that.  Dominionists and reconstructionists actually want the Constitution rewritten and replaced with Old Testament Law.   If that were to actually happen, living in America — especially for vulnerable groups such as women and gays — would be no different than living in Saudi Arabia or Afghanistan.

Yet Christian extremists say that imposing biblical law on everyone through the government is actually religious freedom!   By their logic,  if Christianity were enforced, you would become free of the temptation to sin.   Knowing that sinning might result in draconian punishment or even execution, you would not sin — and therefore be more pleasing to God.   Extremist Christians whine that they are persecuted not because they actually are, but because they are not allowed to discriminate (or oppress!) based on sexual orientation, gender, or religion.  In Trump’s America, the definition of religious freedom has transformed  from the right to worship as you choose to the right to inflict my religious beliefs on you.

I can’t think of anything more un-Christian or unloving.   If you believe in God, why wouldn’t he want you to have free will and choose to worship him?   Forced religion isn’t a sincere declaration of faith, it’s spiritual terrorism.   It’s a way to control and oppress people.  It uses fear of punishment rather than the promise of love as a motivator.   I doubt God wants his people to worship him or behave a certain way only because they’re afraid of the consequences if they don’t.    I believe we were given free will and that it ought to be respected.  That means leaving religion out of government and its laws.    Nothing good has ever or will ever come of it.   It is religious fascism.

There are other words and phrases that have been redefined by the far right, but freedom is one of the most pervasive and common.   We need to become aware of this and other words that are being redefined by extremists as a means of mind control and propaganda to change our thinking patterns.  Critical thinking is necessary to make the distinction, and this is why education (and science) is so maligned by political extremists and fascist groups (including extremist religious groups).