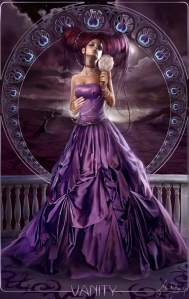 The beautiful paintings in this article are by Marta Dahlig at Deviantart.

Most people have some narcissistic traits and that’s why it’s dangerous to try to diagnose someone you don’t know pretty well or have lived with. Mislabeling happens a lot, and ACONS and victims of abuse tend to be quick to label anyone who shows any narcissistic traits as a narcissist, because we’re so hypervigilant about everything and trust no one.

I hate my narcissistic traits, but I do have a few. Now’s the time I “come out” of the closet about them.

We also can’t forget a little narcissism is actually healthy and protects us to some extent from victimization. No one can be completely unselfish. It’s just not realistic or good for survival.

My two most deadly narcissistic sins are:

1. Envy. I’ve gotten better over the years, but I used to be pathologically envious of those who had more than I did, were more attractive, came from loving homes, had a better job or made more money (practically everybody!) I don’t think this is uncommon in people who were raised and/or married narcissists, and we are not incorrect about having been cheated in life. We have a right to feel like it’s unfair. It’s still an ugly, soul-destroying emotion though, because it makes us hate ourselves even more when we think we fall short of others.

I think what sets my envy apart from true narcissistic envy is that I have never had any desire to ruin or take away someone’s else’s good fortune. I might feel bitter and brood about it, but I never felt it was my right to interfere. Sometimes the people I envied could inspire me too. I also didn’t necessarily hate the people I envied, even when I wanted to. Or maybe it just sets me apart from the MALIGNANT narcissists, because those are the dangerous ones who really want to hurt you.

2. Pride (vanity). I haven’t experienced too much of this until recently. I think some pride is normal and healthy. If you have no pride you feel like you deserve nothing. But I have noticed a tendency to brag about this blog when it’s doing well or my stats are high. Maybe that’s a normal thing for bloggers (I think we tend to be competitive) but I bet it’s also made a few people think I’m a narcissist playing the victim. I hope not, but I still worry about it. I’m always tempted to delete those stats posts after they go up, but then again, why not share good news when you have some to share? Because until recently, I hardly ever had any good news to share. So I’m like a little kid on Christmas Day or something.

I still have to watch this though, because you can drive people away with too much bragging, and pride, as pleasant an emotion as it can be, can turn you into a narcissist eventually. It’s a slippery slope to selfishness and evil. I can’t ever forget that my primary focus with this blog is to get better, and maybe help others get better too through my writing. Not to have X number of views or Y levels of visibility. It’s not about me anyway, it’s about what God wants for me and how he wants me to be of service.

Acquired narcissism due to good fortune is probably why there are so many narcissists in Hollywood and the music industry (not all celebrities are narcissists of course). Their success has probably changed them. Or it drives them crazy. I think only the most mentally sound and insightful celebrities are able to escape from the clutches of acquired narcissism (or serious mental conditions such as bipolar disorder, drug addiction, and even psychosis). It can’t be easy being famous and sought after by millions of strangers and having to be “on” for the media all the time.

Then there’s the other kind of pride–the kind that keeps people from admitting when they’ve been wrong or showing humility when it would benefit them and others to do so. Fortunately, I don’t think I’m guilty of that kind of pride very much. I can admit when I’ve been wrong and am not “too proud” to do so. I think narcissists pretty much have a monopoly on that type of pride.

My last “deadly sin” is sloth. I can be the laziest person you ever met. I’m a world class procrastinator. But I don’t think that’s a narcissist trait. 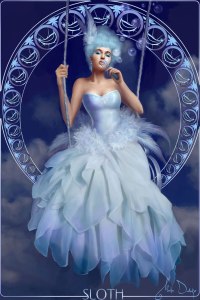