In my readings and observations of people in the narc-abuse community, I’ve become aware that Highly Sensitive People (HSPs), empaths in particular, are highly attracted to narcissists. The reverse is also true–narcissists see an empath and smell blood.  As an HSP myself (though not an empath), I have always been drawn to narcissists as friends and romantic partners.   This has gotten me into a world of trouble and almost destroyed me until I finally learned to resist their “charms” and go No Contact whenever possible.

Why Empaths are so attracted to Narcissists.

It’s a psychological truism that we tend to be attracted to people similar to the people who raised us.  For those of us who were the most sensitive child in the family and as a result, became the family scapegoat, developed codependent personalities, or even developed a form of Stockholm Syndrome toward our abusers, we continue to carry our legacy or “people pleasing” into adult life and find ourselves drawn toward other narcissistic people, who are very good at promising us the world and vowing to solve all our problems.   But getting involved with a narcissist is the ultimate bait and switch–they make a lot of empty promises to love you unconditionally and never betray or hurt you, but they don’t deliver.  Not even close.  All they care about is feeding off of your love and generosity in order to keep their false self inflated like a balloon toy.

Not only are we fooled into believing the narcissist will be the answer to all our woes and fill our own inner emptiness, HSPs and empaths are also drawn to the “hurt inner child” inside every narcissist.  Most people can’t see the emotional void and deep unhappiness at the core of an NPD; they just see the narcissist as either a likeable charmer or a huge A-hole (depending on their role to the narcissist or stage of the relationship), but empaths see beyond the “false self” to what really lies beneath the carefully constructed facade.    This is why empaths and HSPs were so often scapegoated as children–because they were children who could see the ugly truth and sometimes even blew the whistle on the narcissistic parent–and nothing terrifies a narcissist more than being exposed as living a complete lie.

I’ve talked to quite a few empaths who actually seek out narcissists to love, in spite of having been educated about narcissistic abuse and the very real dangers they pose both spiritually and emotionally.  Empaths who choose to love a narcissist and think “this one is different” really ought to know better.   They look at a narcissist and don’t see a predatory, toxic individual who only seeks to use and abuse for their own gain; instead they see only the “hurt inner child” living in darkness beneath the bright, cheerful facade.

Their observations and feelings are actually not wrong.   Because empaths can see the truth about people, the damaged person they take so much empathy on is real.  Narcissists are indeed hurt, damaged, deeply unhappy people, although some abuse victims prefer to think of them as inhuman devils without souls at all.   Narcissists are definitely human, but they are dangerous, and especially deadly to an empath, because of how much such a person tends to give of themselves and how codependent they can become.

Narcissists are drawn to empaths because (even though an empath can see beyond the false self, which scares narcissists), they give them everything they want.   Deep inside, what every narcissist really wants is someone to love them unconditionally, and empaths are more than capable of doing that.  They are also deeply envious of the empath’s ability to feel with no shame, even if they deny and hide their own feelings.   Empaths are compassionate, patient, self-denying, always willing to listen without judging, and generous with their time, money, possessions, emotions, and everything else they have to give, both tangible and intangible.  An empath’s love for a narcissist will cause them to stick by them no matter how much abuse gets dumped on them in return.   Empaths are perfect candidates for Stockholm Syndrome.   They will keep giving and giving, while the narcissist gives nothing in return except heartache and pain.

Some empaths may seem masochistic because everyone else can see that the narcissist is sucking the empath’s lifeblood away, turning them into a dried up husk of the whole person they once were, but the empath, like a moth driven to a flame, continues to give and give and give until they have nothing left to give.   It’s not masochism that drives an empath to stay with the narcissist and allow this abuse, though–it’s the deep belief empaths have that their unconditional love alone can heal the narcissist and make them whole again.

It’s a beautiful idea, that unconditional love can heal a narcissist and transform them into loving, authentic human beings.  It would be nice if things really worked that way, but only in fairy tales and movies do such things happen.   The Beast is won over by Beauty’s love and is transformed into a loving prince;  the miserly Scrooge is transformed into a generous and compassionate philanthropist;  The Grinch grows a huge heart out of the hard little stone in his chest when he hears the Whos singing down in Whoville in spite of having all their Christmas presents stolen;  Jerry McGuire changes overnight from a selfish, materialistic jerk into a nice guy.  Usually it’s the love of someone else–often a woman or child–who is the catalyst in getting the narcissist to change their evil ways.  These movies and stories touch our hearts and bring tears to our eyes because we wish life were really that way. 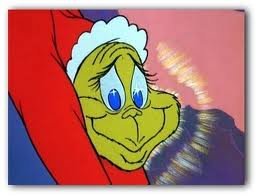 It’s tempting, if you’re an empathic type of person, to want to reach that hurt inner child inside your narcissist and through your unconditional love alone, give them the courage to jettison their false self and let that inner child out, and finally learn how to love.   But what’s far more likely to happen is that in spite of your best efforts, the narcissist will not change and will resist or even attack your efforts to transform them.   They will just keep taking from you, for they have no idea how to give of themselves or how to love.  You become drawn deeper into their web of misery and darkness, and eventually have nothing left to give and finally, your soul is destroyed beyond repair.

The only way to help a narcissist.

You cannot help a narcissist by giving them your love.  The best way to help a narcissist is to stop giving them narcissistic supply–in other words, going No Contact.   Only then is there a small chance that without that fuel, they will be forced to confront their own emptiness and pain, which could lead to them seeking professional help.   But don’t count on it.  Most likely, they will just move on to a new source of supply or try to hoover you back in.

I’ve stated many times that I don’t think most narcissists are beyond hope.  I’m one of the few narc-abuse bloggers that holds to that view, and sees narcissists as a different, more dangerous type of abuse victim.   It’s not a very popular view, but it’s mine and I’m not likely to change it.  A few weeks ago, I wrote about Apostle Paul, a malignant narcissist if there ever was one, who was changed by the Holy Spirit into a righteous (if still slightly arrogant) devoted follower of Christ.    I know of NPDs who are in therapy or treatment, or were in therapy and have actually been deemed NPD-free or are at least working hard to change their ways and become more authentic, loving people.  NPDs  are sad people who know their lives are empty and shallow and essentially meaningless, even if they never admit it.  Some even become consciously aware of how exhausting and essentially unfulfilling their dependence on others to feel good about themselves (and what they feel good about isn’t even who they really are) really is.

I’ve always believed that with both self-awareness (knowing one is a narcissist) and willingness to change (disliking what one has become), that healing becomes possible.  But change isn’t something that can magically happen through an empath’s unconditional love.   If it’s going to happen at all, it takes years and years of difficult and grueling therapy by a trained professional who knows exactly what works for this disorder (and what doesn’t)–and because they are trained in this, are not going to get pulled down into oblivion by allowing the narcissist to feed on their heart like a predatory animal.   Healing can also come through an act of God, as it did with Paul.    We can love a narcissist (but from a safe distance!), and we can ask God to help him or her–and maybe that will turn out to be God’s will too.  You never know.  God may have a special mission for them and decide to remove the scales from their eyes.   But please, empaths and HSPs, never try to cure a narcissist yourself through your unconditional love.   It won’t work.  You don’t know how to do it.  Leave it to the professionals and God.

73 thoughts on “HSPs and empaths, take heed! You cannot heal a narcissist!”