The writer of this post wishes to remain anonymous. Her story of her Costa Rican lover is both sad and funny, so I asked her to write up the story because it’s so colorful. The relationship was doomed because not only was the man in question a narcissist, there was a clash between two different cultures that had no resolution.

My Narcissistic Costa Rican Lover: He hated window screens more than he loved me.
By Anonymous 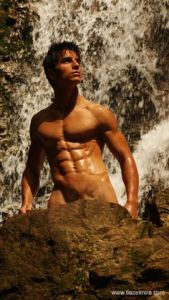 This is about my relationship with my ex boyfriend who was from Costa Rica.

To start off, I’d have to say that he was extremely good looking. He looked like an all American milk and cookies guy. He had perfect teeth and smile and dark hair. He was happy go lucky. His name is “Julio.” I worked part time in a local truck stop with him. He was the head cook, and everyone called him Joe. That’s what they do in diners. They take their migrated names away and call them by a nickname. He did look like a Joe too. He was also a damned good cook. That guy could cook egg after egg and he rarely broke a yolk. If he did break one you’d know all about it. He didn’t know much English but he knew how to swear when he broke the yolk of an egg.

I remember the one time when we were working together during a blizzard. It was just me and him. Then at around 3 AM all the snow plough workers piled in. All 50 of them walked in one after the other and Joe started swearing in the back of the kitchen. I started putting orders up for Joe. Around 20 orders at the same time. Joe couldn’t take the heat in the kitchen and he started throwing the buttered toast out the little window where the food comes out and he rings the bell when its ready. We were so overwhelmed by the 50 snow plough guys that my regular customer jumped in the back of the kitchen and made the toast and helped me serve the coffee.

I also remember that Joe would wig out if you messed with his bread. On one shelf Joe had 20 loaves of bread with the wrappers all twisted in the right direction. Loaves of white, wheat and rye. If you twisted the wrapper to the left Joe went crazy. It took me a while to figure out what was wrong with Joe. We had a language barrier and it took me a while to understand it was an OCD problem he had.

Eventually Joe got tired of the USA and he flew back out to Costa Rica knowing he would not be able to fly back in. Joe original got here by crossing over the border of Mexico. So in a few months I decided to live in Costa Rica with him. Life over there was different. It was laid back and very family oriented. To an extreme. Wherever you went the family came along. A night out included the family. Grocery shopping included the family. All meals included the family. 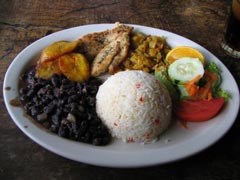 I used to help his mother wash the clothes. I lived in rural costa Rica in a town called Perez Zeledon and we hand washed most of our clothes and then put the heavy jeans through a spinning machine. The children were adorable and well behaved. They didn’t eat much candy. One day I bought bags of candy and the 3 little girls I played with everyday kept asking me for more candy. Then Joe started laughing and he pointed out the window. I saw lots and lots of children outside and I realized I was feeding the whole neighborhood.

The children didn’t have many toys. One of the little girls use to play with chicken feet. They raised chickens and butchered them. It was a rural farming community and if you owned lots of cattle you were considered rich. At night the guys all played soccer in a big field and they woke up at the crack of dawn. At the crack of dawn the roosters would crow and Joe’s brothers would yell at us to wake up in our window. I was definitely not in sync with Costa Rican life. I’m not an early riser.

I did not like the bugs in Costa Rica. The bugs were horrific. And huge. Crickets as big as a tablespoon. Dragonflies with wingspans of a foot. Moths so huge they looked like bats. Giant ants you could hear walking on the ground. In the rural part of Costa Rica window screens were not vogue. None of the native people minded the bugs. I managed to keep the bugs away by turning the porch light on and keeping a fan on me all night with a sheet over me. The bugs were attracted to the porch. In the morning Joe’s sister would wake up and sweep the bugs out. They took pride in their daily chores. Everyday they tore the entire house apart and scrubbed it from top to bottom. They had beautiful ceramic tiles and big huge ceramic sinks.

I asked Joe to please put window screens on the windows to keep out the giant bugs that flew in constantly. He got angry and refused to do it, saying it wasn’t part of his culture and that window screens were “ugly.” He lacked empathy for my concerns about the huge flying insects. I started to think things were not going to work out because he refused to consider my feelings. 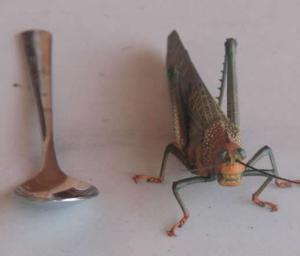 I liked Joe’s mom a lot and she loved me. Even though we didn’t speak the same language, I had no problem communicating with her. She was an emotional woman and we always knew what was on each other’s minds.

After 3 months of Costa Rican life I left because my Visa was about to expire over there and because of Joe’s self-centered and sexist behavior. I loved him but I couldn’t live in a country with a man who refused to put screens on the window, got angry so easily, and treated me like a plaything.

I remember the last day I saw Joe in Costa Rica. I was sad. I thought we may never see each other again due to the strict immigration laws. I looked at him and I thought…I’m going to miss him and I also thought I’m so glad I’m leaving these bugs.

Eventually Joe missed me and he crossed through the border of Mexico again. We stayed together for 9 years but I broke up with him eventually because of the immigration laws and he was 12 years younger than me and because our cultural differences were too great.

Joe was devastated. But he had a double standard when it came to love. Culturally its acceptable for Costa Rican men to run around and do whatever they want. Worse that he was such a narcissist too. That just doesn’t work for an American girl, especially one who’s a feminist.

10 thoughts on “The Narc from Costa Rica (guest post)”