Last night there was a serious chemical leak at the Hyatt Hotel in Rosemont, IL, outside Chicago, hospitalizing 19 people and causing the entire hotel to be evacuated. Here is the news story:

The article contains a video of the evacuation and news commentary.

At the time this happened, Midwest Fur Fest is having its annual 4-day convention there. My son, who is a furry, attended and is staying at this hotel, but he was lucky and did not have to be hospitalized.

Authorities are looking into the matter, and they do believe there’s foul play involved.

Personally I think it was a deliberate act of hate against furries, who are tragically misunderstood by the media and ignorant people who really haven’t researched what the furry fandom is really all about (hint: they are not sexual perverts.)

I wrote this article about furries a couple of months back, and am linking to it if anyone wants more in depth information about furries and the reasons why I don’t mind that my son is one. This article is still one of my most popular and most shared, and it and still appears in my list of Top Posts (though lately it has been eclipsed by my Sam Vaknin articles, LOL).

Anyway, I am just so grateful my son is okay! 🙂 It could have been bad… 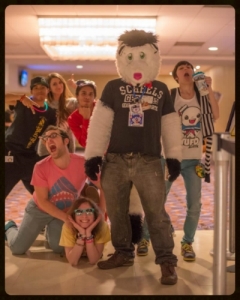 My son in his fursuit “Mex,” the hipster weasel, with some friends. He will be dancing in this suit today.

On a more positive note, my son was one of ten dancers out of 50 who made it to the finals of the dance competition they are holding today. He is going to perform any moment now (he tweeted me that he’s a bag of nerves). The Top 3 dancers win a prize and a trophy (plus it’s a huge honor!). I think he’s good enough to win third place, at least, but even if he doesn’t place in the Top 3, making the Top 10 is awesome and he should be so proud! I’ll post the Youtube video of his performance when it’s up.

10 thoughts on “Hate crime on furries? My son is at the hotel that had a gas leak!!!”