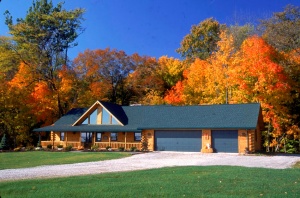 I clean houses part time for a living so obviously I have seen many different types of homes, and it can be kind of interesting. It’s one of the few perks of this job (besides getting to play with awesome pets and sometimes meeting friendly customers who actually tip). The job has given me a crash course on various architectural styles and periods. Some homes are fascinating and have a lot of character (usually older homes), but by far, the most common type of house I encounter are the infamous McMansions and other ugly and cheaply made homes of the “neo-eclectic” style (if you can call it a style) that became popular from the late 1970s to the 2000s.

I don’t like new houses. Most mass-produced homes built since 1980 use exceedingly cheap materials, including hollow doors, plaster or plastic crown molding, and one-piece window mullions made of PLASTIC that regularly come loose, vinyl siding, few to no windows on the sides of the homes, and the homes have very thin or hollow walls. There are other things wrong with them too, which I’ll get to shortly. Builders since 1980 or so try to get the most out of their dollar, and this means a lot of shortcuts are made, and cheap materials are used, even in the more “upscale” homes in some gated communities (another trend that make me want to scream).

Cheap materials and shoddy construction has been a complaint since the first mass produced ranches and split levels were built in the 1950s-1960s, but I have found that those old ranches and split levels far surpass the newer homes in quality of materials and labor (even though they don’t quite measure up to the solidness and uniqueness of prewar homes). Yes, their rooms may have been small and the hallways narrow and cramped, and the kitchens in the originals were unpleasantly separated from the rest of the house (keeping the housewife in the kitchen away from the family and guests).

But at least they used real materials–real hardwood (not laminate), real ceramic tiles (instead of that cheap plastic sheeting used in modern bathrooms), real wooden shingles (though many have been replaced with vinyl siding), and I actually like the layout, especially in the split levels, with their innovative way of separating various areas of the home within limited space while still keeping a kind of open plan. It worked well for families. The houses also fit well into the landscape without overwhelming it. Indeed, recently there have been several websites praising the humble mid-century ranch/split level/raised ranch and even a few historical preservation societies are popping up to protect and promote “mid century domestic architecture.”

What is happening is what happens to anything that becomes “old”–what was once dismissed as tacky or gauche during its time takes on the charm and character of anything old or vintage. Since those mid-century houses are fewer in number now (many have been razed to make way for McMansions and newer homes in gated communities) and also now sport old growth trees and mature landscaping, and no longer all look alike (because in any older development, these houses have had changes and additions, and so are as distinct from each other as even older houses in prewar neighborhoods. These formerly “ticky tacky” houses are showing signs of becoming an older style that possesses charm, simplicity, unpretentiousness and convenience–taking its place alongside older but respected modern styles like the Craftsman and Prairie style homes of the early 20th century.

The ranch house, in fact, is a mass produced style that was inspired by designs by Frank Lloyd Wright, the architect who first created the Prairie style of home (the forerunner of the ranch) back in the 1920s and 1930s, of which “Fallingwater” is probably his most famous undertaking. Prairie style homes (developed by a group of Chicago architects inspired by Wright) had low pitched roofs, overhanging eaves, “ribbon” style banks of windows, and sometimes several levels separated by short flights of stairs (forerunning the split level), built-in garages, and were designed to fit into the surrounding landscape without overpowering it. Most of these houses can be found in the Midwest. 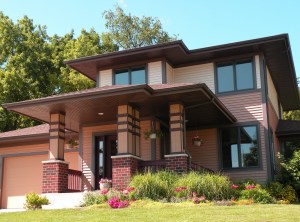 The standard ranch house has its origins in California dating back to the 1930s, but they didn’t really take off until the late 1940s and 1950s as returning war veterans needed cheap houses to start new families in. The split level style evolved from the ranch house and also was inspired by the Prairie style. It became popular for two reasons: it separated living areas (public rooms from private bedroom areas) without separating them TOO much (as more formal houses with long flights of stairs do). The split level was a innovative way to fit a ranch home (which is better suited for a flat landscape) into a more hilly or uneven landscape. 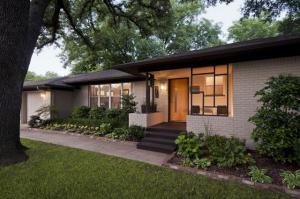 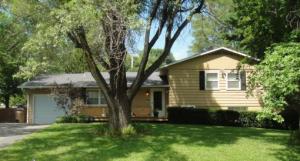 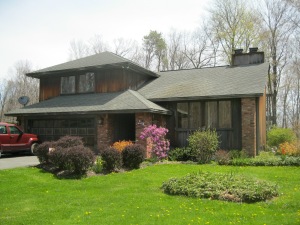 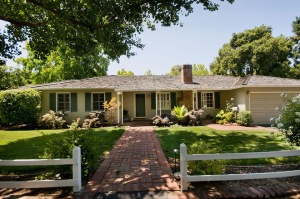 These mid-century houses in their original state definitely had their disadvantages (lack of light, walled-off and smallish kitchens, small bathrooms, etc.), but here is what I like about them:

— They have a certain acquired midcentury charm with their overhanging eaves, casement windows, and low pitched roofs, and their picture windows (later these windows were of the bow-style–curved glass with many panes or sometimes just vertical panels). 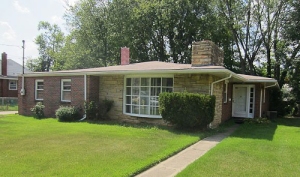 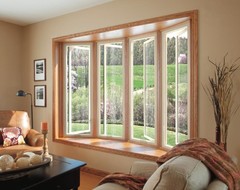 I don’t think these beautiful windows are made anymore (especially the type on the left), but if not they should be.
— The houses were large enough for a medium sized family but allowed some measure of privacy without closing everyone off from each other.
— Recreation rooms in finished basements, sometimes with sliding glass doors that stepped onto a patio.
— built in garages, that unlike newer neo-eclectic homes built after the late 1970s, did not overpower the house or stick out like an ugly tongue in the front.
— they used real materials like wood, stone and ceramic instead of plastic and laminate
— They take extremely well to renovations, additions and modernization
— They are humble but attractive homes that don’t overwhelm the surrounding landscape
— They lack the ridiculous pretentions and ostentatiousness of newer homes from the late 20th century.
— They don’t have a ton of steep stairs to deal with every day, so work better for the handicapped and older folks who can’t take climbing steep flights of stairs.

It may come as a surprise, but most popular styles of houses were considered ugly or tacky back when they were new. Craftsman homes (aka California bungalows), one of the first modern styles, is a style everyone seems to want these days, were once a mass produced style built from a kit you could order from the Sears catalogue! At the height of their popularity back in the early 20th century, they were considered cheap homes for people who couldn’t afford anything else–now everyone wants one! 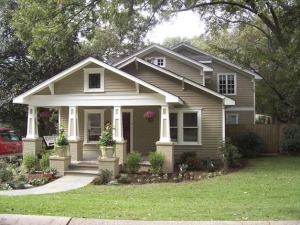 The same thing is true of the beautiful and ornate Victorian homes we admire so much today. When they were new, they were considered pretentious and tacky monstrosities that overwhelmed the neighborhood. Now many people love these old houses.

Fifty or sixty years after the first mass produced ranches were raised in the infamous Levittowns, these houses are finally acquiring desirability, especially since they are rarer now (many have been torn down or replaced). Older people–Baby Boomers in particular–have always dismissed this style because of its associations with the lock-step conformity of the 1950s (and that’s the generation most likely to be attracted to the pretentious and ugly McMansions), but younger people, particularly Millennials, don’t have a memory of any negative associations, and are buying these mid-century homes. They appreciate their convenience, lack of pretentiousness, and simple charm. And because these older homes take well to renovations and additions, many of the updated specimens are absolutely beautiful–retaining the midcentury overall style, but now sporting skylights, vaulted ceilings, larger windows that let in more light than the originals, updated, bigger kitchens that have been opened to the dining and living rooms, and renovated bathrooms with modern fixtures. Some developers have recently been building updated versions of ranches and split levels. An example is shown in this drawing: 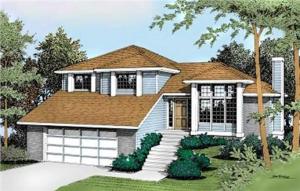 I don’t care for the oversized Hummer garage that sticks out like Jimmy Durante’s schnozz, but other than that, the architecture remains true to the midcentury modern style, with an updated look.

To contrast, let me take a minute to rant about McMansions and other neo-eclectic styles of the past three decades. I’ll just list everything I hate about them.
— As already stated, except for the exceedingly expensive “custom designed” homes, they are built shoddily, with cheap or fake materials, not much better than what you would find in the average trailer.
— Most of them are a mishmosh of various past style, combining Colonial features with Craftsman with Greek Revival with God knows what else. They are schizophrenic looking, not seeming to know what style they should be. It’s as if the builders couldn’t decide on one style, so they tried to use elements of every known style, and the effect is ugly and migraine inducing. Granted, some expensive custom designed homes try to stay true to whatever original style they are emulating, but those houses are in the minority.
— many of these monstrosities are in “gated communities,” which to my way of thinking is just a symptom of the class stratification, inequality and one-upmanship that is so pervasive in America today.
— They are pretentious–with their ridiculously complicated, overly steep “mansard” roofs, fake dormers (that sometimes don’t even look out from any room in the house), unnecessary multiple gables, 30 foot high ceilings in the “great rooms” with windows that can’t be washed except by professionals, ugly and oversized “Palladian” windows, lofts with catwalks that are dangerous for children who could climb over and fall over the railings, steep staircases, “his and hers” master bathrooms, and master suite bathroom/spas larger than the average living room (and who the hell needs a tub the size of a swimming pool and glass shower enclosures that look like crap once hard water stains get on them and who wants to be viewed when they’re taking a shower anyway? I sure don’t). The only thing I like about the new houses is the kitchens–those are pretty cool looking and if I had one I’d spend all day there cooking and baking. But these updated kitchens can be easily incorporated into older houses, and have been, so I don’t need a fucking McMansion to have an awesome kitchen.
–They are tall and overwhelm the landscape as well as smaller houses in the neighborhood, and because they are so new, many are without trees or lanscaping of any kind. They look like boxes sitting where they don’t belong.
— They also are usually out of scale with the small lots they sit in
— Most of them lack any windows on the sides (or have just one or two), making them look like some sort of movie set. And they’re not built much better than a movie set either.
— The 12 foot high ceilings in the smaller rooms (such as bathrooms) make them seem cold and uninviting.
— Everything freaking ECHOS in these houses. Everything freaking ECHOS in these houses.
— They are inefficient due to their huge size and require enormous outlays of cash to keep them sufficiently heated and cooled. That means they also make a huge environmental footprint. Any one who is concerned about the earth will stay far away from these environmental vampires.
— Most of them sport HUGE garages–sometimes that fit as many as 3 SUVs or Hummers–that overwhelm the home. The “snout houses” that have garages like this look like homes for cars, not people. (Most midcentury homes, in contrast, either tuck their built in garages on the side of the house, or if in the front, are one- or at most two car garages).

Let’s take a moment to appreciate the beauty and simple charm of the wonderful neo-eclectic house in all its glory. 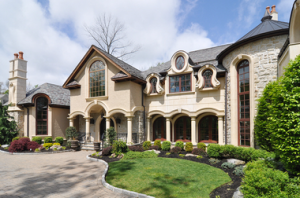 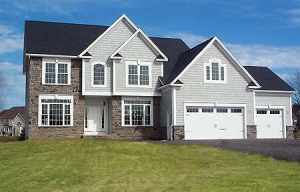 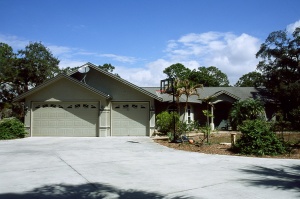 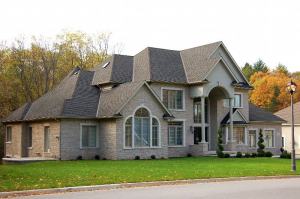 My eyes! They burn!