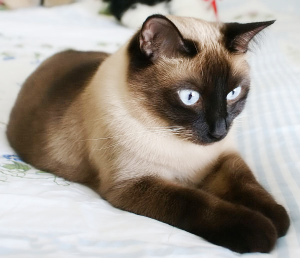 My roommate, Stacey, took her cat Isaiah to Florida with her (she never texted me to let me know she got there safely, so I hope she did), and now I’m down to just two: my little huntress Cleo, and my black and white tuxedo cat, Sheldon. Both are outdoors most of the time (that’s not really my choice, but once you let a cat go out, it’s almost impossible to make them indoor-only) and it almost feels like a cat-less house now.

A year ago I still had 5 cats AND a dog. That was too many animals in this small house, but it’s a far cry from only two cats around.

I can tell the cats miss Isaiah. When they are in the house, they walk around as if searching for someone and sit around and meow plaintively, as if asking me where he is. Of course they have short memories and will soon forget he was here, but I know they miss him (even though he and Sheldon used to occasionally get into spats over who was the “alpha male”).

My new roommate, a gay man my age named Kevin, moved in yesterday. He seems very nice. He was the only person who answered my ad that I felt comfortable talking to, and he’s introverted like me. He seems to like the room. He doesn’t have any pets but he likes cats (he isn’t a fan of dogs so I guess I won’t be getting one of those).

I’m thinking of getting a Siamese cat–not a young kitten, but an older one, or a young cat who’s already been spayed or neutered and had all its shots. There are always ads on Craigslist (a lot of people can’t deal with all the talking they do), and some of the Siamese I’ve seen are absolutely gorgeous.

I’ve wanted a Siamese for a long time, but held off because I already had too many cats. The only problem would be keeping him indoors (I prefer a male) since my other two cats always want to go outside. But with the colder weather coming, Cleo and Sheldon may want to be indoors more, and maybe an active and talkative new cat might tempt them to stay in.
I think a Siamese might help lift my mood a little too. They’re very intelligent and affectionate and you can almost have a conversation with them.

This video always makes me smile. These two Siamese are VERY upset about their person taking a shower and not paying attention to THEM. 😆

8 thoughts on “I want a Siamese cat.”