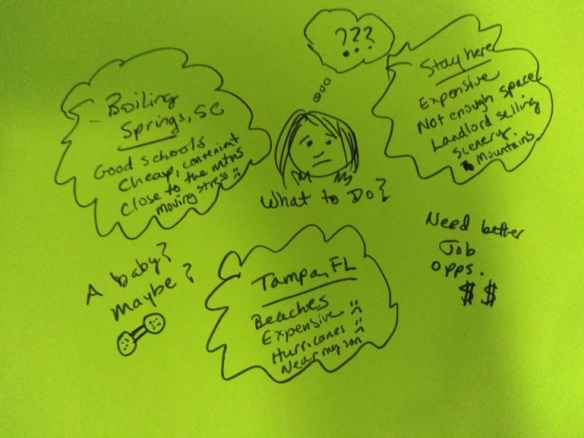 A lot’s been going on in my life lately.    My daughter was supposed to get married last Monday, but the money they’d been saving (about $900) got stolen, and that included the money for her to register and get tags for her new vehicle (she had enough from the insurance to get a 2007 Nissan) and pay for their marriage registration at the courthouse.

She was devastated about the loss (of both the money and the “friend” who stole it from her) but is getting over it now.   Now the date has been changed to Monday the 28th, and they are going to get their marriage registration this week.   I’m as excited as she is.

She has been living with me off and on for…well, forever.   Since she’s become clean from drugs (it’s been a couple of years now) and she’s become more responsible and is working steadily, I actually like this arrangement.    It’s more affordable sharing the expenses with another adult, and I absolutely hate the idea of having to find a roommate (who I may not like) at my age.

My daughter and I are like best friends.   Sometimes our relationship is more like that of close friends than mother and daughter.  I think that’s good.   We just really like each other and I really like her fiance too, and the three of us have a good arrangement here in this two bedroom house in the North Carolina mountains just outside Asheville.

But frankly, the Asheville area, as much as I like it, is becoming ridiculously expensive as more people from other places discover its high quality of life, its natural beauty,  the many outdoor activities available, and its vibrant arts and music scene.  Even the outlying “suburbs” are more than we can reasonably afford.  And we need to move to a bigger place, with 3 bedrooms, not just two.

And why would that be?  Well…because my daughter and her soon to be husband have been stricken with baby fever and  I have a feeling one of the reasons they don’t want to wait any longer to marry is because they want to start a family sometime very soon.  She told me by the end of 2019 they want to start trying.   A few things need to be taken care of first before she can think about getting pregnant, and we definitely want to be in a bigger place first, so the baby has room to grow and we don’t all go insane!

The plan is for the three of us to look for a place together, because frankly, at my age, I don’t want to be living alone.    I’m not sure how much longer I can work full time, and if I cut back to part time hours, which I certainly will need to do at some point, I won’t be able to support myself.  As I don’t own my own home and would have to rent,  it just makes more sense for me to live with them.  Luckily, this is also what they want.  They adore the idea of a live in “Nana” once they start their family.   I rather like that idea myself.  It’s a throwback to the age of extended families, and in these uncertain, dark times, I think extended families may eventually be making a comeback, if they aren’t already.   Our families are going to need to be there for each other more than when Social Security and old age benefits were a certainty and life was just more affordable in general.

It’s funny, because I wasn’t at all excited about becoming someone’s grandma until my daughter started talking about babies all the time.   My first reaction was one of anxiety and near dread. Babies are scary!  They have so many needs.  They’re loud and messy.  So many things can go wrong.  They need so much STUFF:  all kinds of bulky contrivances that take up space and clutter up a small house, not to mention toys and lots and lots of attention.  I also worry about children being raised in such a toxic political environment as we have right now. If it were me contemplating having a child in the age of Trump, I’m not sure I would do it. But then again, I might! For many women, if not most, the urge to reproduce can be overwhelmingly strong, no matter what kind of political environment they live in or how bad things are.

As many mothers of young adult children probably do, I also kept thinking to myself, “She’s too young; she’s not ready.”  But that’s wrong.  She definitely is.  Yes, she’s been through a lot of adversity but has come through it beautifully.  It’s so easy to keep thinking of your child as a child, even when they’re fully grown and capable of making their own decisions.  She’s an almost 26 year old woman and it’s perfectly normal for her to want a family at her age.   And  the more I think about it, the more happy the thought of being someone’s “Nana” makes me.

We’d definitely need three bedrooms and two bathrooms though, and that would be a near impossibility for us if we stayed where we are.    I’m also tired of the ice and snow of winter and want to be somewhere just a little warmer.   The job market here also isn’t the best as it’s mostly service and/or seasonal work.

We briefly considered moving to the Tampa area, because my son lives there.  I do love the idea of the entire family being in the same general area.   But it’s just not practical or very affordable.  I also don’t want to have to deal with my fear of hurricanes every single year.  Even if we lived inland, there’s the risk of tornadoes or very high winds.  So, as much as I’d love living close to the beach, we decided to nix that idea.    Florida’s also way too far from my daughter’s dad, and much as I don’t personally care about that (I don’t speak to him), he lives all alone and she worries about him.  That’s just the kind of person she is, and she wants to live close enough to be able to check up on him frequently.

We also considered just moving to a different part of North Carolina, but other cities are just as expensive as Asheville (or more so), and I don’t want to live in the boondocks either,  where houses may be cheap but would be so far away from any city and we’d all still have to deal with the ice and snow and the long driving distances to and from a job every winter.

So I began to consider the idea of starting over in South Carolina.  But not too far into South Carolina.  We still want to be near the mountains, so we can come back here whenever we want, and my daughter can still visit her father here.   Codependent or not, she worries about him and loves him, and he has no one left but her.

So we began to look at Boiling Springs, SC.   It’s a suburb of Spartanburg, a fairly large city with many more employment opportunities than Asheville has.   Boiling Springs is in the foothills of the Blue Ridge Mountains, and you can actually see the mountains to the north.  The area isn’t completely flat like most of South Carolina.  It’s hilly, but doesn’t have the steep and sometimes scary almost vertical slopes you find farther north.   There are hiking trails and other things to do, and it’s also about an hour closer to the beach (one thing I hate about living here is being so far from any coastline).

Best of all, the school district has been rated #1 in South Carolina, and for my daughter and her soon to be husband, that’s important to them.   Boiling Springs is a little more expensive than neighboring areas in South Carolina, but it’s still a lot cheaper than where we are now, and it’s near everything we’d need or want:  she’s close enough to her dad to visit frequently, we’re still less than an hour away from Asheville and its environs, and we’d be living almost in Spartanburg.

We can definitely afford to do this, but change is hard.   I’ve been living in this area since 1993 and have grown attached to it.  I also hate the idea of having to get things like my car registration changed.   Then there’s dealing with the movers.  And the expense.  And the credit checks.  And the deciding what to throw away, give away, sell, and keep.  All those things are a pain and they can be frustrating.  No doubt about it, moving is always stressful, even if you’re only moving next door!

But I think the time has come, and I think all  three of us will be happy and I think it will be a good place for my possible future “grandbaby” to grow up.   SO in a few weeks, we’re taking a short drive down to Boiling Springs to get a better idea of what living there would actually be like, and how affordable it really is.   Maybe we’ll even look at some houses and apartments.

There’s one more good reason to move. My landlord is selling this property (though I’ve been assured there’s no need to worry about moving right away), so I think it’s best we just find a new place, in a brand new environment that will be a positive one and less expensive for all of us.