This is a reblog of an excerpt from Pastor Paul J. Bern’s book “The Middle and Working Class Manifesto — 3rd Edition” 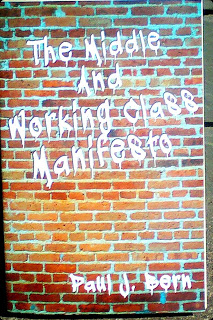 I found this excerpt on Pastor Bern’s blog, The Progressive Christian Blog, which is a politically and socially progressive blog based on biblical principles and is therefore truly progressive in the ways Jesus was during his time on earth, and expects Christians to follow his lead, rather than merely “liberal” (watered-down “feel good”) sort of Christianity that is more like junk food for the soul than spiritual nourishment.

I was thrilled to finally find a true social gospel that someone like Rev. Martin Luther King Jr. (such people are rarities today) could get behind — a biblically based blog that doesn’t engage in Trump-worshipping, blaming vulnerable populations, or the selfish “prosperity gospel” type of thinking so prevalant on the Christian Right.   I think what he has to say is important so I wanted to share it with all of you.

I Dare To Dream

The march of economic inequality, from which springs the source of racism, poverty, crime, violence, and lack of access to healthcare and higher education, has become the new civil rights issue of the 21st century. (I like to call it Rev. Dr. MLK, Jr. 2.0.) King’s dream of unconditional equality throughout the country can finish becoming a reality when the economic barriers that we all face on a daily basis finally come down for good, like an economic Berlin Wall circa 1989. Rev. Dr. Martin Luther King, Jr. spoke to the masses during the 1963 civil rights march on Washington and said, “I have a dream…”. By writing and publishing these words it is my intent to help take up where King’s Dream left off, and to do anything I can to help finish the job that he started. And so let me slightly change that to, “I dare to dream”.

I dare to dream of a world in which the gap between rich and poor is gone forever. We all deserve to live in a world where wealth has been redistributed in a peaceful and orderly manner and not by the barrel of a gun. I dare to dream of a country where wealth has been redistributed in 4 ways. First, every worker earns a living wage so poverty can be eliminated. Second, free higher education and vocational retraining must be available to every worker for life, including daycare available to all, that would be based on the worker’s or student’s ability to pay on a sliding scale, because everyone has the right to better themselves at will. Third, I envision an America where quality health care is available to every worker at nominal cost for life. Single-payer healthcare based on the current Medicare model must not be reserved only for those who can afford it, but it must be a fundamental human right for all ages. I dare to dream of an America where there will be no such thing as someone without health insurance, where every citizen will have lifetime healthcare and prescription drug coverage without qualification, and where there will be the fewest sick days for American workers and their children of any country in the developed world. Fourth, “we the people” demand the abolition of the federal tax code, including elimination of the despised federal withholding tax, which would give every American worker or business owner an immediate 18% pay raise.

I dare to dream of a new America with a robust and viable economy. That is why I have been insisting on a $14.00 per hour minimum wage since 2010. I dare to dream of a new America where education will be subsidized from the cradle to the grave so that the US develops the most formidable work force the world has ever seen. I dare to dream of an America where all workers have the right to organize, to a flexible work week and to paid family or maternity leave. Most other developed countries already do this. The US is the only exception and that has got to change. The only remaining question in my mind is whether we can accomplish this peacefully or otherwise, and it looks more and more to me like it will be the latter.

I dare to dream of an America where affordable housing is the law of the land, where home ownership becomes a right and not a privilege so we can wipe out homelessness, and where the price of a house is limited to the sum total of ten years income of any given individual or household purchasers. I insist on a country where home ownership isn’t part of an exclusive club with the highest “credit scores”. It is, and must become, a basic human right. Even the cave men lived in caves of their own!

I dare to dream of a country with new public works programs that put an end to unemployment forever so the USA can have full employment all the time. America’s infrastructure needs to be rebuilt, and its inner cities are in dire need of an overhaul. What a better way to accomplish this!

I dare to dream of a new America with an all-new public school and university system that has an Internet-based curriculum that can be updated at will, and that is second to none in the developed world, with a new and more intensive school year, and that has viable replacements for standardized testing, and where class size is limited by law. I dare to dream of a country where teachers make what their Congressional representatives make, and vice verse.

I dare to dream of a new nation where unconditional equality is the law of the land for every citizen without exception, and this will include economic equality. I dare to dream of a new America where there is no more income tax, no capital gains tax, no alternative minimum tax, no estate tax, no self-employment tax, and where families and businesses can have a tax free income unless they are very wealthy. In its place would be a national sales tax, such as a Consumption Tax, where everyone pays proportionately the same tax rate on only what they consume, plus an “excess wealth tax” for persons with annual incomes exceeding $3 million, and for businesses with annual proceeds exceeding $300 million, so America’s budget can be balanced and fair.