I saw someone’s tweet today that caught my attention because I could relate to its sentiment.

True story @ work tonite I completely crushed a paper cup out of stress at work & almost threw it away but felt bad for the cup so I used it.

And a few minutes later:

This falls under the same category as me feeling sad after accidentally stepping on an ant, but worse.

I thought I was the only one who ever had these absurd feelings of remorse or pity for inanimate objects, but apparently I’m not.

I remember a couple of years ago, when I was painting my kitchen Kelly green, I accidentally flung some of the paint from my brush all over a small throw pillow that had somehow wound up on the kitchen floor and I’d neglected to pick up and bring to safety.  (Don’t ask me how it wound up on the kitchen floor).   A small fake-velvet tan pillow with floral embroidery was permanently ruined with Kelly green paint and it was all my fault.  I had to throw it away and I felt like weeping.

How absurd is that?  I was never attached to that pillow; it was worth nothing.  I probably found it for a buck at some yard sale, but I remember feeling like the worst person in the world because the thing looked so pathetic with lurid green paint splattered over its delicate tan velvet adorned with Chinese-factory made embroidery.

I remember when my daughter was four, she tossed a Pound Puppy out of our car window to see what would happen to it.   Of course I had to keep going, but in my rearview mirror,  I saw the car behind me run over the stuffed toy and flatten it like a pancake.  Its petroleum-based stuffing exploded all over the road like popcorn.   My daughter laughed.  I felt inexplicably sad.

There have been other times like that too.   Like the time that, in frustration, I threw a paperback book (one I’d never read and never intended to read) against the wall and split its binding.  Or  the other time I accidentally burned a cheap oven mitt that had a cute lattice-like pattern on it.     I actually liked that oven mitt, but it had cost me $3 at Dollar General.   There were a gazillion more just like it. Besides, it was intended to be stuck inside a hot oven.   Getting burned was one of the risks that came with its intended use.

None of these were valuable objects, or even objects that had any special meaning to me.  They were just part of the background — things I’d acquired and that were just there.   Things I never thought much about.    Of course I realized they had no feelings, and could feel neither emotional or physical pain.   I’m not an idiot.

And yet, when bad things happened to them — or worse, when I did bad things to them — I felt just terrible, as if I’d killed someone.   Would these inexplicable feelings of guilt had been less had I loved those objects or had they been valuable, either financially or in the sentimental sense?    Maybe I’d have grieved over their loss but have been spared that guilt.   After all, those poor objects were never loved, and then were destroyed through my own carelessness.  Maybe if I’d cared, I wouldn’t have done things like spill green paint all over them or thrown them hard against a wall in frustration.

Sometimes I also feel bad for abandoned or neglected objects.    There’s a website I visit sometimes called Terrible Real Estate Agent Photos.  The site owner has a bizarre obsession with those ubiquitous plastic outdoor chairs.   He or she calls them the “garden chairs of solitude” and positions them in poignant configurations that just rip your heart out, like in this photo: 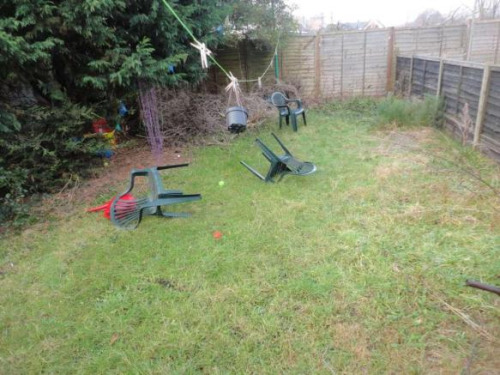 Whenever I rescue some forgotten or abandoned object from certain destruction by the trash compactor that barrels down the road every Monday, I feel like I’ve done a good thing for it, as if the thing actually cares.