(Continued from Part One)

Screenshots are all courtesy of The Wayback Machine (which you can spend hours browsing — it’s fascinating in its own right).

Several changes now.  I finally grew a brain and got rid of the appalling “Museum of Narcissism” and from here on out, the title would not change again (except for the removal of the apostrophe).

I also shifted the focus (seen in the subtitle) from “narcissistic abuse” to NPD and BPD in general, as I was beginning to grow tired of just being angry and was starting to want to learn more about these disorders (of course, narcissistic abuse has always been a staple of this blog and still is).   “Aspie” still remained for the time being.   I also had expanded the number of menu items in the subheader.   By now, my follower count was 1,041.

LOH was now nearly a year old.  Some important new changes are evident.   I think it’s beginning to resemble the current look more–I’d finally removed “Aspie” from the subheader, as I now had more clarity on what my real problems were (and it wasn’t Aspergers).  Visually too, the look is an improvement, with a darker gray menu bar which made the menu items easier to read.   I probably had a few too many menu items though.  Later I had to consolidate them so some appear now as little dropdowns.  1,115 followers.

Font changes in both the headings, title and text.   The font I chose for the title and headings would not change again until last week.   Still too many menu items so it looks a bit cluttered.   1,221 followers at this point. 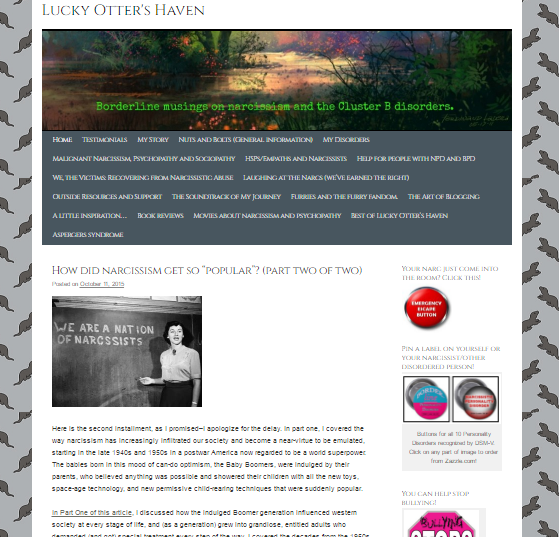 The second major facelift.   This new look would stay (with only minor changes) until just one week ago.  The wallpaper and header were both in a green “beehive” pattern, with the header photo-manipulated to be somewhat lighter in the middle so the simplified subhead “walking on the borderline” would stand out.   Menu items now white on black. I think overall it’s a nice look, very professional, but I finally tired of it a week ago and LOH got its third major facelift. 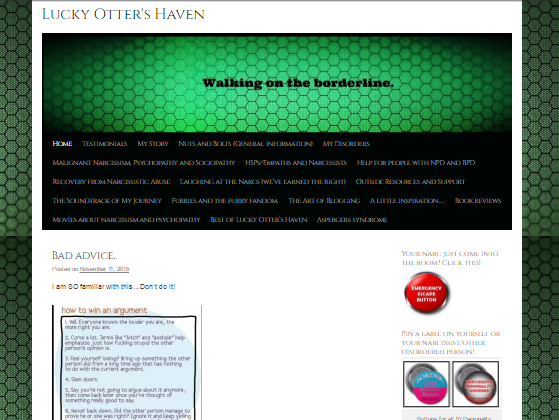 Not too many changes, other than FINALLY consolidating the menu items so it looks a lot less cluttered and easier to read.   1,591 followers.

This is the way this blog looked just prior to the facelift I did last week.   The only real change here is the subheader changed from “walking on the borderline” to “Confessions of a recovering borderline.”  (this change was inspired by my therapist telling me he thought I no longer had BPD).   There were two more screenshots taken in August, but nothing else had changed.

The new look is somewhat of a throwback to its original look.  I think it looks friendlier and more welcoming than the “beehive” look. 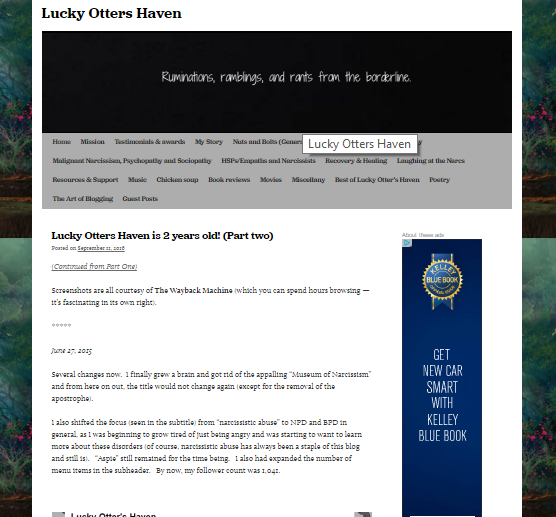 I love Ferdinand Ladera’s moody painting, and wanted to use that again, but I wanted a simple black header this time, so this time I used the painting as the wallpaper instead.    I wasn’t sure how that would turn out, but I love the look, and I like the way the dark trees appear on the right hand side.  I also changed the header fonts and think they’re easier to read, and removed the apostrophe from “Otters”, mainly to simplify the look of the title.  It’s not really ungrammatical, because I’m not the only otter swimming up from the murky waters of an abusive past.