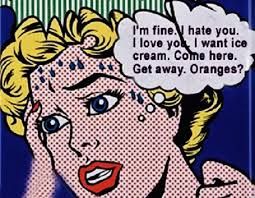 Most psychologists believe personality disorders are very difficult, if not impossible, to cure, because they are a core part of the personality. But I’ve noticed something interesting about BPD, at least in women diagnosed with it (including me)–it tends to improve or disappear with age.

Maybe this is a little TMI, but I used to get terrible PMS. For a few days before my period started, I was cranky, moody, stressed, and more prone than usual to fly into unreasonable rages or burst into tears for no reason. I was hell to be around. I was also more prone to engage in risky or self destructive behaviors when I was premenstrual. All this behavior was very borderline, and it continued this way for years, but once I reached menopause a few years ago, I seemed to stabilize and have not had the type of crazy mood swings or displayed any of the outrageous behaviors I used to. My borderline behaviors, when they do come out at all, tend to be more passive aggressive than aggressive.

I’m a member of a closed group on Facebook for people with BPD, and I’ve heard other women (and it’s mostly women who are diagnosed with BPD anyway) say the same thing happened to them once they reach a certain age. Their symptoms seem to improve or even disappear once they are no longer undergoing monthly fluctuations of female hormones. It may worsen temporarily as menopause hits due to the sudden drop in estrogen (that causes a woman to experience hot flashes and other unpleasant menopausal symptoms), but once a few years have passed they say they have never been better. There’s one younger woman in the group who suffered from painful cramping and migraine headaches during periods and was put on birth control pills to control the physical discomfort, and said she was surprised about the added benefit–her BPD symptoms got better too.

So I’m wondering if there’s a connection between BPD and the hormone fluctuations of the menstrual cycle, since it’s mostly younger women who display the more dramatic and unpredictable BPD behaviors. The fact that the symptoms of BPD (unlike those of the other personality disorders) can be improved with drug therapy makes me wonder if BPD is really a personality disorder at all. Some experts believe BPD is really a form of PTSD established at an early age by abuse (which I agree it may be), but is there a biochemical component involved too?

I’m not the only one who’s noticed a connection between BPD and PMS. Here are two articles on the subject:

Just something else to add to all the confusion surrounding the baffling disorder of BPD.

12 thoughts on “Is there a connection between BPD and PMS?”