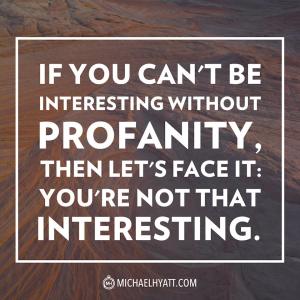 My friend Gale Molinari at Galesmind.com posted this meme yesterday.

In general, I agree with the above sentiment. We all know people who cuss constantly and after awhile it can become annoying and offensive. People who pepper every sentence with the 7 verboten words not approved by the FCC sound, well, stupid, crude and boring.

However, I also think an occasional, well placed epithet can add impact and emotional urgency under certain circumstances. We’re all grownups here, and it’s not as if we haven’t all heard these words and know what they mean. They have stuck around the English language for so long for a good reason, and while their original references to various private parts, bodily functions or female dogs in heat have been diluted by their myriad other uses in recent times, if they’re not overused, they retain their power to drive your point home.

I don’t think there are too many people who won’t tolerate an occasional F-bomb, S-bomb or even the dreaded MF-bomb when it’s warranted.

For example, if you are writing a rant about how much you hate tailgaters (one of my biggest pet peeves), it’s much more attention grabbing to write, “I want to brake-check those fuckers. I hope they all rot in hell,” than “I want to brake-check those jerks. I hope they all fall off a cliff.” Or, “I was a complete bitch to him” has more emotional power than “I wasn’t very nice to him.”

Emotional impact what is what your rant is all about. You want your readers to feel your rage with you–you don’t want to be all polite and politically correct, a concept which is overrated as hell anyway. Because in real life, if you’re mad, really mad, you’re not going to be thinking about being polite. You are going to cuss like a drunk who just stepped on the edge of a rusty beer can.

That being said, if profanity is overused in a rant, the effect will be the opposite–then these words lose their emotional impact and you just sound like a fucking asshole or an uneducated, crude person no one wants to listen to–and your readers will go elsewhere to find another writer who doesn’t use the F-bomb as a verbal tick.

Another advantage swear words have is that they’re cathartic. It just FEELS a whole lot better to refer to that obnoxious tailgater, that psychopathic boss trying to gaslight you, or that inconsiderate person who blocks your way down the aisle at Walmart as a “fucking dick” than as a “big dumb heartless poopiehead.” You feel a little bit better, even if the words were only said safely behind the windshield of your car or muttered to yourself out of earshot.

Swear words can be valuable tools in your writer’s toolbox, but like a high calorie, high-fat dessert, they can be bad for you if you overindulge. Use your best judgment, and of course, if using these words really makes you squirm or you really are morally opposed to them, then don’t use them.

If you’re a really good writer, there are other ways to give your rant emotional impact without using swear words. You can also use a series of keyboard symbols, such as g$#&*@&m f&%#@#g b$##&d!!

For the rest of us, profanity can be a handy shortcut to emphasize the impact of your anger, rage, shock or surprise. Just keep the kids away.

42 thoughts on “Is profanity in blog rants okay?”