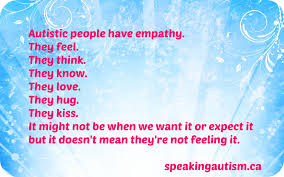 Autism and narcissism have a few things in common: First, they are both spectrum disorders. With autism, the spectrum runs from mild (Aspergers, colloquially known as “geek syndrome”) to full blown autism so severe the patient seems retarded and cannot even perform the most basic self-care or live without full time supervision. With narcissism, the spectrum runs from “benign” narcissism (people who are self-centered and vain but not completely lacking empathy or a conscience and don’t deliberately want to hurt anyone) to full blown malignant narcissism/psychopathy (which are basically one and the same).

Second, they are both at least partially (in the case of autism, probably totally) due to a miswiring or malfunction in the brain. One can be born without the ability to love or feel empathy (though abusive parenting does seem to exacerbate an inborn tendency), and almost all persons with autism were born with it (although there does appear to be a suspicious correlation between Aspies and narcissistic mothers, which probably exacerbates the Aspergers symptoms).

In one important way, autism and narcissism are mirror-images of each other. Narcissists cannot feel empathy for others, but can fake empathy quite well if they wish to. They can be very good actors. People with Aspergers (or mild autism) have the opposite problem. They can feel the emotions of others around them (very keenly in fact) but due to their inability to read social cues and difficulty acting “appropriately” in social situations, they can seem unempathic because they can’t express their emotions well.

Due to their difficulty showing empathy (people with Aspergers can seem aloof, cold or just awkward) it’s become popular to believe that people with Aspergers or autism, just like narcissists, do not have empathy. M. Scott Peck’s book “People of the Lie” is one of the best books I’ve ever read about malignant narcissism (it wasn’t called that when the book was first written in the early ’80s), but there was one thing that really bothered me: Dr. Peck used the term “autism” a number of times to describe the psychopath’s inability to feel empathy.

Nothing could be further from the truth. Here is an excellent article that makes mincemeat of this popular notion. If anything, people with mild autism/Aspergers empathize too much. I would even go out on a limb and say most of them are also Highly Sensitive People (HSPs). HSPs worry excessively about the impression they are making on others and whether or not they’ll be liked–and that sort of anxiousness itself can be socially disabling, even if no autism is present.

15 thoughts on “People with autism do not lack empathy!”